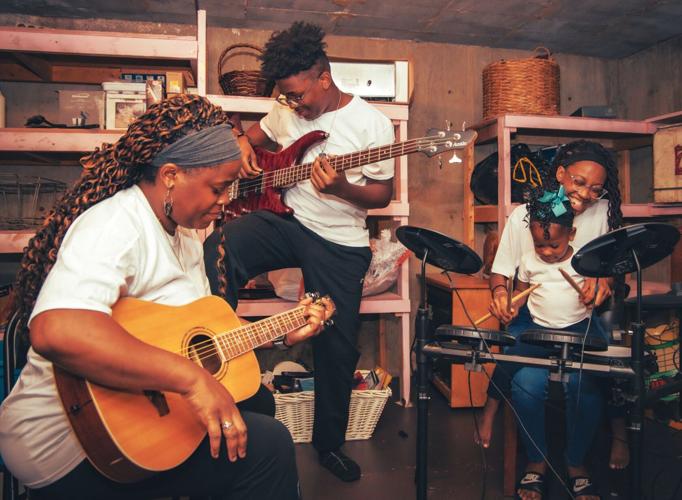 Laronda Griffin was born to educate. As a child she remembers setting her dolls up in a make-believe classroom and playing teacher.

“I am literally a teacher by heart,” Griffin said. “I’m always trying to teach somebody. I just love doing it.

Griffin’s mother was a music teacher for more than 30 years but, she said, that’s not where her love for educating stems. It was her experience learning in St. Louis’ city and county public schools that fostered her thirst for education.

“I got all the way to high school feeling like I couldn’t do the basics (reading and math). So, I had to figure out how to teach myself.”

Griffin said she flunked the second grade which was heartbreaking because her twin sister moved ahead of her in school. Griffin caught up in the 8th grade, by taking extracurricular classes. Because of that accomplishment she and her twin sister graduated together.

“I’m rich in mind, energy, and spirit. I’m rich because I’ve been able to be with my children and not have anybody tell me what I had to do and how I had to raise them.”- Laronda Griffin, homeschooling parent

Griffin, who went on to earn a master’s degree in education, has five children that she has homeschooled since they were born. She is currently planning her eldest boy’s graduation party. This landmark coincides with her 18 years as a homeschooling parent.

Griffin said she chose to homeschool her children because she felt deprived as a public-school student. Her goal is to make sure her children have the necessary foundations of education so they can determine how they will navigate and succeed in life.

That objective was not derailed by the coronavirus. Parents nationwide had to adhere to an educational environment that was drastically altered by COVID-19. Many, who were struggling financially, had to find ways to make sure their children could learn from home. They had to cope with educational and social interruptions while grappling with fears of their children getting infected during hybrid educational courses.

“That’s something we didn’t have to worry about,” Griffin said, underscoring the value of teaching her children at home. Also, she added, as a homeschooling mom, she was prepared for alternative education.

“We’re used to this lifestyle,” Griffin explained. “When you’re homeschooling and trying to maneuver between costs and ways to support it, you have to do all sorts of classes anyway. There was one year where I did all virtual classes. I did hybrid learning before COVID. I’ve tried all kinds of curriculum. It all depends on the child’s needs. So, I was able to tailor what worked best for each child.”

“I felt sorry for those kids who are very sociable and couldn’t be around their friends. They went all virtual and had to sit in front of a computer all day and they’re not used to that,” Griffin said. “I also felt for the parents who were so used to having their kids in schools who had to struggle to stay home and teach them. Because I found some good in it (the pandemic’s restrictions), I was like hey, ‘guys, you’ll be alright.’”

Griffin’s biggest challenge these past two years has been trying not to be perceived as a “bad mommy” because of her strict in-home safety protocols, the fact that she limited her kid’s social activities with their public-school friends and not being able to take them to the Boy’s & Girls Club or the YMCA where they usually socialized.

“I didn’t want my kids to think that mommy was the bad guy because they couldn’t comprehend what was going on in the nation. But, on the other hand, I didn’t want them bringing anything back to the house. So, I was between a rock and a hard place.”

Homeschooling has increased nationwide, mostly due to the pandemic. The most significant increase has been among Black families. The Census Bureau's Household Pulse Survey found that in April 2020, 3% of Black households homeschooled their children. That number was up to 16% by October 2020 and is climbing still.

While COVID-19 was indeed a catalyst for more homeschooling Black parents’ other factors apply. A February 2022 Time.com article listed concerns such as racism in schools, parent’s frustration with white-washed history lessons, disproportionately higher discipline rates for Black students, the lack of Black educators (only 7% of public-school teachers are Black). Another reason cited is the politically inspired effort to demolish critical race theory (CRT) in schools even though it’s not part of the public-school curriculum in this country.

Griffin’s decision to homeschool came before most of those factors became “issues.” For example, she dismissed the CRT revolt as “nonsense.”

“People just want to find things that put them in an uproar,” Griffin said matter-of-factly.

The determining element in her homeschooling decision was her desire to instill her values in what her children read, heard and what they were taught.

“It’s more like my doctrine. For instance, I want my children to pray whenever they want. I don’t want them being told what they had to learn, what they couldn’t learn…I don’t want all of that.”

Although her motivation isn’t race-based, Griffin understands that “race” plays a role in the educational process.

“I realize that history is really ‘his-story.’ So, if I don’t think it’s really beneficial for what they are required to know, I don’t really stress it,” Griffin said, adding, “I give them history but if I don’t believe everything from his-story is going to add to their lives, then I don’t teach it.”

Griffin said she has willingly sacrificed the type of salary a teacher with a master’s degree can fetch. For almost 20 years, she’s had to find creative ways to finance her decision. Child tax credits were used to fund textbooks and curriculum materials each year. She experimented with running a daycare but had trouble tolerating parents who brought their sick children to her house. She did independent contracting and, before the pandemic began in 2020, worked from home booking passengers for Carnival Cruise Lines. When COVID-19 shut down cruises, it also ended Griffin’s gig.

Homeschooling hasn’t exactly protected Griffin from COVID. Late last year, she and her husband caught the virus. As cautious as she was about her children bringing the virus into the house, it was Griffin who got infected and infected her husband. She’s not 100% sure, but Griffin believes she caught it from one of the workers at her financial services business.

She laughs about it now but, Griffin said, it was scary for a little while. Although their children didn’t get infected, the fear was palpable for about two weeks. It took that long for the couple to rebound from the virus.

All-in-all, Griffin said her homeschooling experience has left her “rich.”

“I love my children and really love my life,” Griffin gushed. “If my children get sick, mommy is going to nurse them back to health.

“So, I’m rich in mind, energy, and spirit. I’m rich because I’ve been able to be with my children and not have anybody tell me what I had to do and how I had to raise them.”