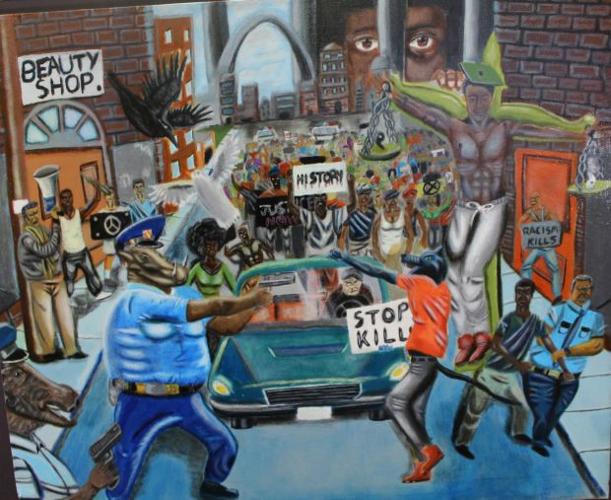 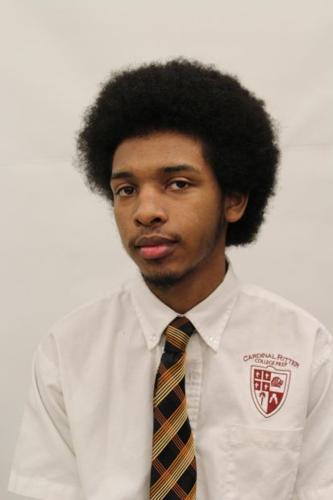 “It is hard to imagine that as a young African-American man from North St. Louis, I could receive such a prestigious award by the U.S. Congress,” said recent Cardinal Ritter College Prep graduate David Pulphus.

He was recognized with a first place certificate in Missouri’s 1st Congressional District as part of the United States Congressional Art Competition at the end of April.

“I think that the art work selected for this year’s winner of the Congressional art competition has to be the most creative expression that I’ve witnessed over the last 16 years,” Clay said between votes on the House floor.

The art competition, entitled “An Artistic Discovery,” featured a nationwide art contest coordinated by members of the U.S. House of Representatives. The contest recognizes the talents of high school students across America.

Each year, members of Congress put out a call for students to compete in the contest, and the resulting work is displayed on the white walls of a long tunnel that connects House Office Buildings to the U.S. Capitol.

Over 200 members of Congress and over 50,000 high schools students have taken part in the popular and competitive program.

The work is seen by members of Congress, staffers, lobbyists and thousands of visitors to the U.S. Capitol complex.

“The same painting that was hanging in the Cardinal Ritter student Art Gallery is headed to Washington, D.C.,” Pulphus said.

His winning work is an acrylic painting featuring a downtown street scene with the Gateway Arch displayed in the background and three police officers with animal heads, two with guns in hand, and a large group of marchers moving toward the police.

“The painting portrays a colorful landscape of symbolic characters representing social injustice, the tragic events in Ferguson and the lingering elements of inequality in modern American society,” Clay said in a news release.

The lead marcher carries a sign that says the word “history.” Pulphus’ painting includes several signs, one of which says “Racism Kills,” and another “Stop Killing.” On the right you can see a man being crucified wearing a graduation cap holding the scales of justice in his hands.

The painting is an interpretation of the months of unrest that took place in the region in response to the fatal shooting of unarmed teen Michael Brown Jr. by then-Ferguson Police Officer Darren Wilson on August 9, 2014.

“He biked from his home near East Grand close to Fairground Park to the Webster University location in the Arcade building downtown St. Louis on a chance that his studies in art at Cardinal Ritter might just pay off.”

Pulphus will travel to Washington, D.C., courtesy of Southwest Airlines, to unveil his winning entry.

As this year’s first place winner, he will also receive a scholarship, according to Clay’s office.

The contest is in its 32nd year, and this is the 16th year that Clay has conducted the competition in Missouri’s 1st Congressional District.

“I am truly honored to receive this award and will do my best to live up to it,” Pulphus said.

Lauren Victoria Burke, a political analyst for the National Newspaper Publishers Association, contributed to this report.

[censored] This piece of "art" should be burned and the congressman who approved and provided it should be REMOVED FROM OFFICE!! All this does is incite more violence against police officers -- who aren't paid enough for what they do as it is! This country is fast becoming a "lawless state" and without law's we can have no sovereignty. Come on President Trump and drain the swamp of people like this irresponsible congressman and restore law and order to our Nation. God, please heal our country!