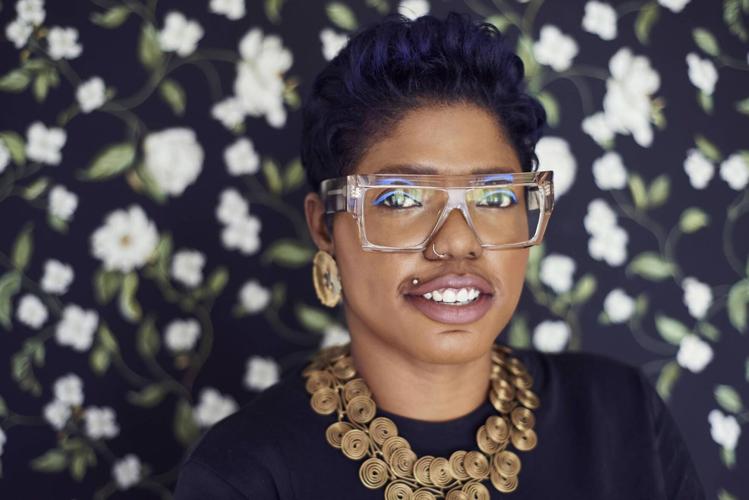 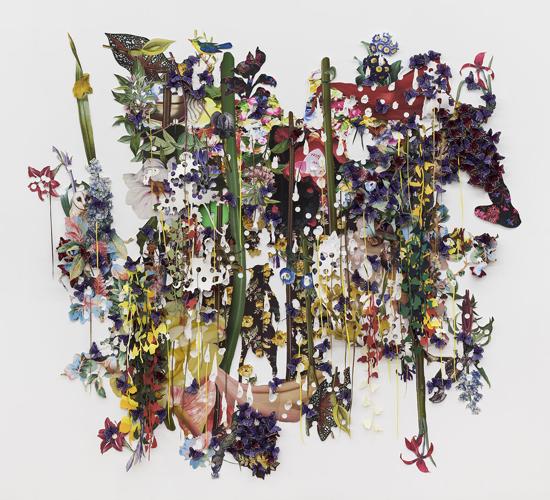 Ebony G. Patterson was speaking by phone from her mother’s home in Kingston, Jamaica, discussing why it is so difficult to experience her complex, three-dimensional, mixed-media art work by looking at photographs of it, when she was interrupted, she said, by the sound of “a man cutting the garden.”

Since her show opening at Contemporary Art Museum St. Louis is themed and titled after a garden, perhaps there was a story there?

Not really. The man outside the window was cutting the common section of an apartment complex grounds; in St. Louis, we would have said he was “cutting the grass.” But, Patterson said, her mother, Thelma Ferguson, is “an avid gardener” and maintains a plot on the apartment grounds. The day before, her mother had taken Patterson to her garden plot to showcase her sweet peppers, pomegranates, scotch bonnet peppers, and orchids.

“I have always known her as someone interested in growing things,” Patterson said. As for the artist herself, as a girl growing up in Jamaica, not so much. “As a kid, I was absolutely not interested,” Patterson said. “I was always tasked with the responsibility of watering her plants after a day in school.” A garden was a chore.

Years later, as a young adult, she said, she would “hop in a car and drive into the bush, into the Blue Mountains, for a couple of days just to be in the wild, untamed section of the island. That felt really good to me. I imagined living in a landscape like that at some point.”

In the past, her mother's home garden was a chore. The untamed bush felt like a future home.

Last spring, Patterson planted a garden that was something of a hybrid between her mother’s planned, nurtured plot and the untamed wild of the Blue Mountains. While an artist in residence at The Momentary, a satellite of the Crystal Bridges Museum of American Art in northwest Arkansas, she planted some plants with nourishing properties and some plants that are poisonous, and then she did nothing to keep any of them alive.

“They were left to the elements," she said, with nothing but rain, sun and natural pollinators to sustain them. The results? “The plants with poisonous properties died,” she said. “Only the healing plants thrived.”

A healing message is needed badly right now, in particular here in St. Louis, where CAM will open her exhibition on Friday, September 11. However, there is still a measure of poison in the beautiful gardens she creates – out of inorganic materials, that is. The girl who resented the chore of watering her mother’s garden grew into the artist who planted, but did not water, healing and poisonous plants as art. Now she cuts and shreds paper and other materials to fashion objects that look, at least at a distance or in a photograph of the work, like a garden in bloom.

“I understand that we are visual creatures, like bees attracted to the color of the flower,” Patterson said. “I use beauty as a tool to seduce the viewer to take a closer look at something different.”

Just what exactly that is will need to be seen in person in three dimensions. Photographs of the work, though beautiful in themselves, do not reveal their depths. The artist’s language for the work, however, offers clues.

The title of her two-part exhibition at CAM is “...when the cuts erupt...the garden rings...and the warning is a wailing...” One part is an immersive installation in the Front Gallery; the other is a monumental collage that runs along CAM's 60-foot Project Wall titled “and the dew cracks the earth, in five acts of lamentation…between the cuts…beneath the leaves…below the soil….”

Why all this wailing and lamentation to signify works of such visual beauty? Because of the colonial history of racist exploitation.

The aboriginal name of the island now known as Jamaica was “Xaymaca,” denoting “a land covered with wood and watered by shaded rivulets” – the wild, untamed spaces in the mountains that felt like home to the artist. It was the British who brought the idea of the garden to the island – along with the idea of the slave plantation. Hinton East, who planted the first public garden in Jamaica in the mid-18th century, was a slave owner.

“The idea of the garden is anchored in colonial nostalgia,” Patterson said, and that nostalgia effaces a history of exploited Black bodies. Jamaica became independent as recently as 1962, which is itself amazing, but that was still well before Patterson's birth, and she wants her work to be relevant now. She talked about Black bodies, not only toiling on colonial plantations, but also lying dead on American streets as victims of violence.

This instinct to bear witness to Black bodies on the street and the notion that urban place names often reference landscape with embedded colonial nostalgia leads to the fact that Michael Brown was killed and left lying dead on a street called “Canfield Green Drive.”

Canfield Green. Is that an example of what she was talking about?

There was a long silence.

“Yes,” Patterson said. “I was not aware of that. I am just making note of that.”

“...when the cuts erupt...the garden rings...and the warning is a wailing...” by Ebony G. Patterson will be on display at Contemporary Art Museum St. Louis from September 11 through February 21, 2021.