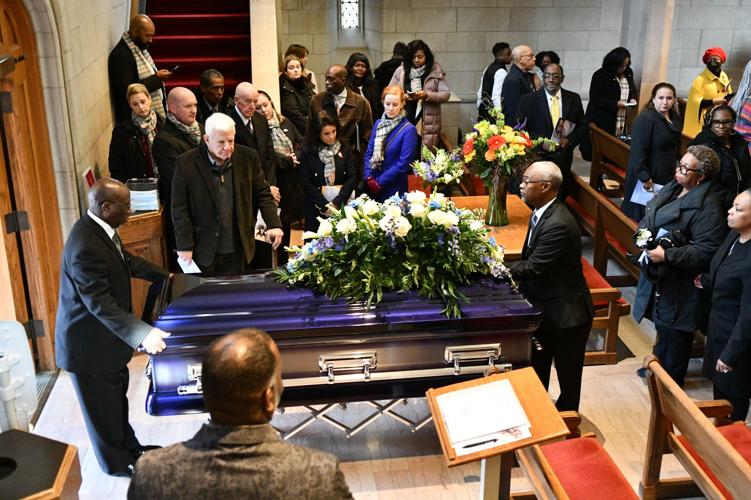 Martin Luther Mathews the co-founder of Mathews-Dickey Boys and Girls Club leaves Graham Chapel followed by family and friends on the campus of Washington University, Thurs. Nov.17, 2022, after a Celebration of Life service. 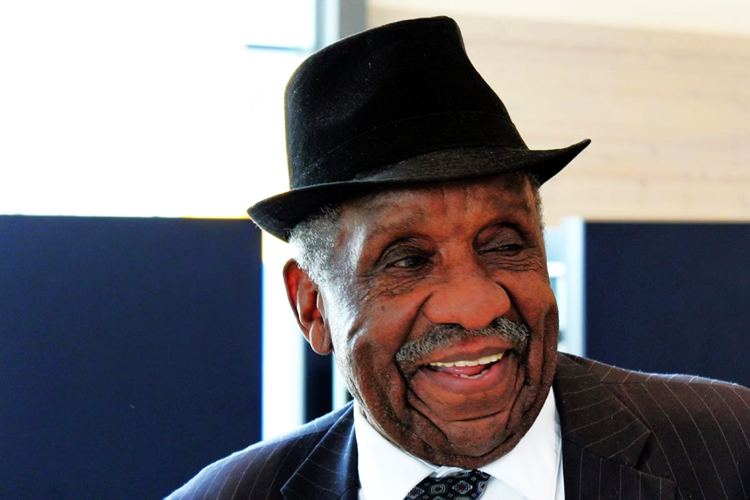 A “girl dad” to five daughters, Martin Luther Mathews and his late wife Barbara had no biological male children. But on Thursday morning, Graham Chapel was also filled with “sons” who gathered to honor the memory of their chosen father.

“Apart from my own biological parents, there is no one I admire or respect more.”

They called him Mr. Mathews – but make no mistake about it, the bonds he formed through his more than six decades of service to the St. Louis community as co-founder of the Mathews- Dickey Boys and Girls Club rivaled that of any patriarch.

“I was offended when I came in, because Mr. Mathews had a way of making you feel like you were his only son,” said Bishop Elijah Hankerson III, president emeritus of the St. Louis Clergy Coalition and nationally renowned leader within the Church of God In Christ faith community. “Wave your hand if you were his son. Look at your neighbor and say, ‘you are not the only one.’”

The hands that waved spanned generations. They were different colors and from all walks of life.  “He had plenty of daughters too,” Hankerson said. “If you were one of Mr. Mathews’ daughters, wave your hand.”

Hands of the women in the front pew dedicated for the family arose. But arms also waved in just about every pew. Among the many proclaimed daughters was sports icon Jackie Joyner-Kersee.

Some of the children he adopted through his work – like Hankerson and Joyner-Kersee – were adults. He mentored and compelled them to further apply their gifts, skills and influence to better serve the region. Wendell Covington, his immediate successor as leader of the Mathews-Dickey Boys and Girls Club, also fell within this category.

“He always stood in the gap for me, both personally and professionally, and for that I am forever grateful,” Covington said. “There will never be another man like Mr. Mathews. None of us can ever replace him – or even put his shoes on. All we can ever hope to do is walk in his footsteps.”

An influencer of epic proportions

Most of Mathews’ parenting via Mathews-Dickey came through relationships built as he shaped the lives of the youth who belonged to him through his organization. The principles and practices Mathews compelled them to apply in their own lives – particularly his mantra of “respect, restraint and responsibility” – were a recurring theme in the remarks from those whose lives he directly influenced as a coach, mentor, organizational partner and friend.

“He was the epitome of selflessness,” Urban League of Metropolitan St. Louis President and CEO Michael McMillan said in a statement of condolences read by Bill Fronczak. “He cared deeply for our community and treated every child and every family as though they were his own.”

In some cases, Mathews did both.

Tom Sullivan used to sit on Mathews’ porch waiting for him to return home from work so he could learn more about baseball.

“I was one of those that Mr. Mathews and Mathews-Dickey put their arms around and it was the best thing for my life,” Sullivan said. He now directs the club he once played ball with.

Karl Grice was not yet a teenager when he became involved with Mathews-Dickey and built a cherished relationship with its co-founder. “I sought his opinion, absorbed his words, mimicked his manner, tried to replicate his people skills and aspired to obtain his wealth of knowledge,” Grice said of Mathews. “Apart from my own biological parents, there is no one I admire or respect more.”

Mathews called on Grice – who went on to become an architect – to design the present-day location of the club. They were both disappointed that we were not able to secure the site of the former St. Louis Public School stadium at Kingshighway and St. Louis venue, which had a rich history of sports.

“As a young architect, I could not see the forest from the trees, but his vision enlightened me,” Grice said. “He showed me how the site could work for the club and showed me the steps to implement the project.”

Soon after the facility at Penrose and Kingshighway was completed, President Ronald Reagan declared the campus and the organization that it housed a national model for youth-centered development when he visited the completed facility in 1982.

Sports media personality Mike Claiborne said the leadership he received from Mathews as a young right fielder for the Mathews-Dickey baseball team had a lasting impact.

“He and Mr. Dickey had the patience of Job – and it had such an impact on me and so many other people,” Claiborne said. “They would say, ‘Work a little harder, pay attention and keep being a good teammate.’ I realize over life, those are the same principles that I live by now.”

In the late 1990s, Donald Danforth III was moved by Mathews and Mathews-Dickey to establish City Academy. The school – located directly across from the club – is the only private, independent elementary school in St. Louis that offers scholarship support to 100 percent of its student body.

“He told me, ‘Build what you would expect for your own children. Make it the very best’,” Danforth said. “That’s how he lived his life. Those high expectations form the backbone for Mathews-Dickey and City Academy.”

Mathews’ commitment to providing the region’s youth with opportunities and education through athletics has had an impact on the region beyond measure.

“What started as an effort to help young people in the neighborhood beautifully morphed into a public service work that has impacted thousands,” U.S. Congresswoman Cori Bush said in a proclamation honoring Mathews’ life and contributions to the region. “His work will be etched in the fabric of St. Louis forever more, because it was rooted in love and commitment to our children and their futures.”

Early on in his eulogy, Judge E. Richard Webber declared that Mathews was the greatest man he had ever known.

“Just being in his presence taught the meaning of honesty and respect,” Webber said.

According to him and thousands – perhaps millions – of others, St. Louis and the world is a better place because of the life of Martin Luther Mathews with his grit and determination to make life better for everyone he touched.

“Think of each child he transformed as a pebble being tossed into a pool of water without limiting boundaries,” Webber said. “And how those ripples go on forever and improve the lives of generations that follow.”

Like the man who attendees gathered to honor, the tone of the service was more upbeat and celebratory than somber.

“This moment begins our promise to follow his examples of perseverance and determination and to continue his mission of giving, service and sacrifice to our children,” Grice said.

Raymond Turner, one of the original group of boys who began with Mathews in 1959, expressed his confidence that the legacy of Mathews would live on – long after everyone seated in the chapel.

“You live on through your seeds,” Turner said. “As long as the seeds are fertile, that tree will never die.”