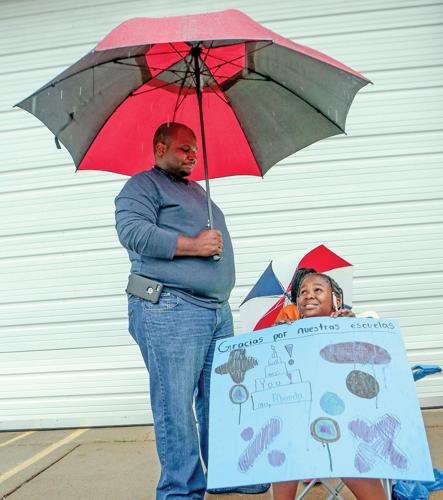 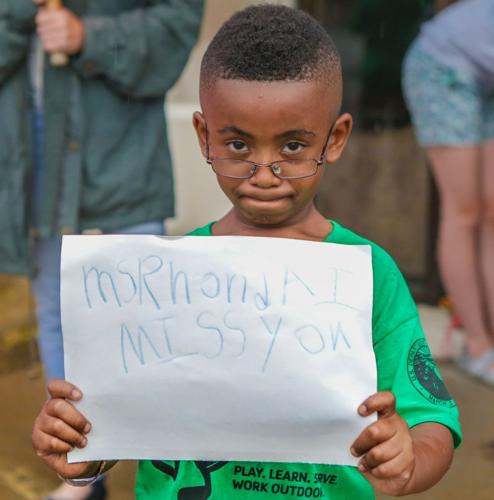 Ephron Campbell, 6, who attends the Chinese School, expressed his feelings about the firing of founder Rhonda Broussard by the St. Louis Language Immersion Schools board during a protest on Tuesday, June 16 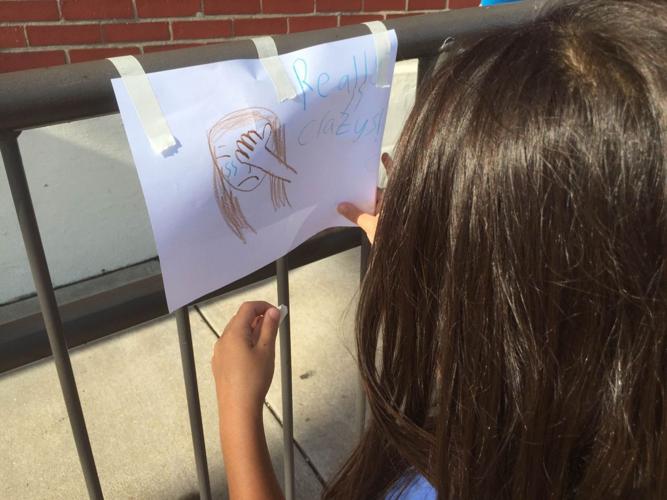 Ephron Campbell, 6, who attends the Chinese School, expressed his feelings about the firing of founder Rhonda Broussard by the St. Louis Language Immersion Schools board during a protest on Tuesday, June 16

Shocking many parents and students, the St. Louis Language Immersion Schools Board of Directors announced Saturday, June 13 that they had replaced school president Rhonda Broussard, who founded the charter school in 2009.

“This transition has been under consideration for some time,” wrote school board president David Luckes in a letter to school parents and staff. “The board and SLLIS’s extended community are grateful for the work Rhonda Broussard has done over the years to build SLLIS from the ground up.”

Luckes told The St. Louis American he could not comment on why they decided to replace Broussard because it is a personnel matter. The decision was made during a closed board meeting held on Friday, June 12 at 6 p.m. The board voted unanimously for the change in school leadership, he said.

Taking her place is William T. Rebore, senior vice president of the education consulting firm BAFC Consulting that the school board hired. Luckes said BAFC’s contract was signed not long before the board’s vote to remove Broussard. Luckes declined to provide the firm’s contract amount, the contract itself or the exact day it was hired, saying he would announce these details at the June 24 board meeting.

The board is not calling Rebore the school president. Luckes said Rebore is leading the three school leaders and staff “during the transition,” or until the interim president is selected.

The news outraged many parents, especially because the board chose to make the announcement after the last day of school, “with a Saturday summer break email,” said parent Loretta Zasaretti.

“Where has the school community engagement taken place since this has been ‘under consideration for some time?’” Zasaretti wrote in an email to Luckes. “Was this a voluntary move for Rhonda? Or a corporate style, bottom line move, as detractors of charter schools speak of?”

Broussard did not return a phone call from The American.

An African American from Lafayette, Louisiana, Broussard first came to St. Louis to study at Washington University, where she majored in French and secondary education. She also holds a master’s degree in French studies from New York University.

Rebore is white and is currently an education professor at Saint Louis University.

On Tuesday, June 16, about 20 students and parents stood in the rain with signs outside of the Spanish School to protest the decision. Several parents said they were “devastated.” They also questioned whether the consulting firm would be able to fulfill Broussard’s school vision – which combines the innovative, leadership-oriented International Baccalaureate Organization curriculum with language immersion in the urban public school setting.

Susan Herzberg, a SLLIS parent, said many believe that school board member Vince C Schoemehl Jr. pushed the effort to oust Broussard. Earlier in the year, Schoemehl announced that the board wanted to close the International School – a secondary campus that had just opened in August 2014 – without Broussard’s knowledge, she said.

“He freelanced the decision,” Herzberg said of Schoemehl. “The board has just continued to make surprising decisions to the parents.”

Schoemehl told The American that he cannot comment because Luckes, as chair, is the only board member who can speak to the press about the school.

SLLIS was opened in 2009 with the French and Spanish schools. In 2012, SLLIS opened the Chinese School, followed by the International School in August.

Tracy Britt, a SLLIS parent with two students in the district, had her seventh grader enrolled in the International School. She attended the board’s “emergency meeting,” Britt said, which upset many parents.

“That was just wrong,” Britt said. “We already committed to sending our kids there, and the deadline for other schools had already passed. That’s just another example of how the board is insensitive to the parents.”

The board decided not to close the International School, in the end. SLLIS’ charter from the Missouri Department of Elementary and Secondary Education (DESE) is overseen by the University of Missouri – St. Louis. The school has repeatedly received international recognition.

Herzberg said she was involved when SLLIS was just an idea Broussard had.

“Seeing it come to life has been amazing and inspiring,” Herzberg said. “To have the rug yanked out from under us over some operation issues that were not clearly defined and having her forced out is extremely upsetting.”

After the board’s announcement, students posted hand-written signs up at the school, stating “I love Rhonda” and “Think of the kids.”

About 57 percent of the schools’ students are African-American and almost nine percent Hispanic, according to data from DESE.

SLLIS’ achievement gap among minorities mirrors that of many other charter and public schools. African-American students are trailing their white counterparts considerably in both math and English language arts.

Broussard’s leaving will have a significant impact on the district’s black students, Zasaretti said.

“There is already a sore lack of diversity in SLLIS, particularly for African-American students, and now the one consistent presence of a leader and nurturer is gone,” she said. “I am speaking for myself, but there needs to be more transparency – or expect an eventual exodus of at least my child, who has been there since first grade.”

Britt said that for six years the board has heard parents’ concerns, but little has changed. She feels Broussard was often used as a scapegoat and “took the heat” from parents, but the board needs to be held accountable for lack of progress. Britt also said the board should have held an emergency meeting with parents to share this important news, rather than wait until school had ended and send a mass email.

“The way they handled this is horrible,” Britt said. “What a way to start off this new direction that they are supposedly heading in.”