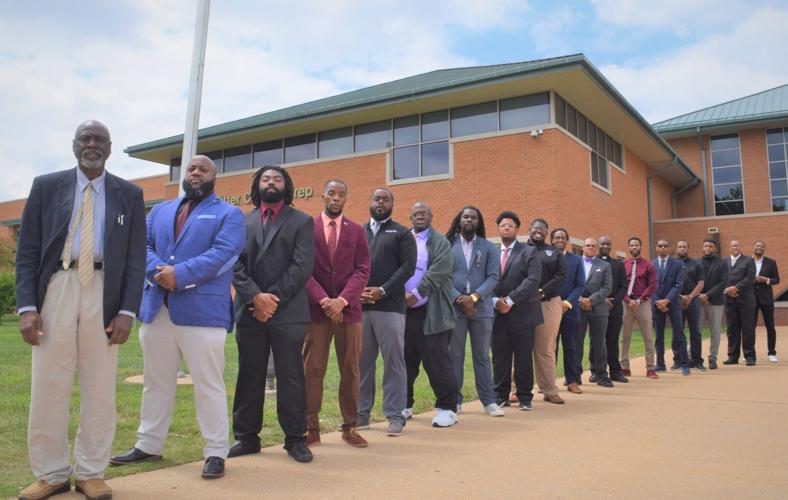 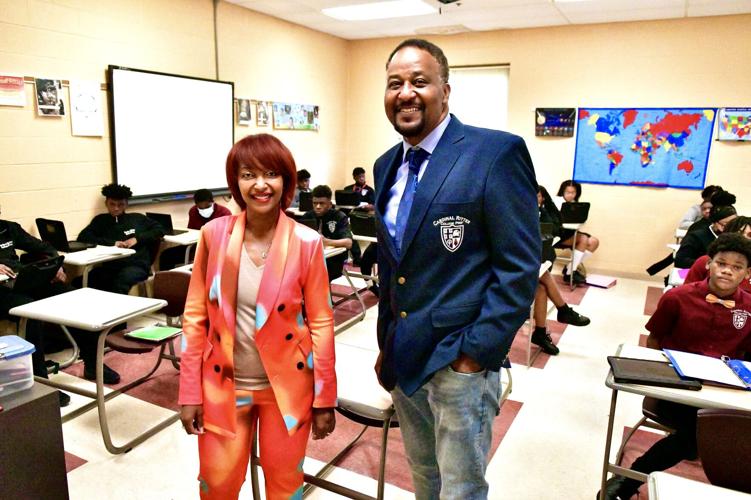 The year was 1979. President Jimmy Carter was in the White House, Sony had just released the Walkman, The Sugar Hill Gang released their first commercial rap hit, "Rapper's Delight" and Stephen King’s “The Dead Zone” was on the “best-sellers” list.

In St. Louis, there was a less heralded phenomenon being birthed on the eduation front.  The St. Louis Archdiocese Board of Catholic Education established a community representative task force to conduct a survey. For two years, they asked Black North St. Louis residents and parents what they wanted from a Catholic school in their neighborhood. The community’s response led to the founding of Cardinal Ritter, a co-educational college preparatory high school. Named in honor of Cardinal Joseph Ritter, the school opened, in August of 1979, in the Walnut Park neighborhood.

“We were the only school that began based on ‘what black kids need.’” said Tamiko Armstead, President of Cardinal Ritter. “They went to the community to get those answers and that’s where our mission of ‘Faith, Academic Excellence and Leadership’ came from.

“When you consider some of the issues in the community these kids face, it’s just imperative that they have these black male figures-probably now more than ever.”- Randy Reed, Hall of Fame basketball coach and Black studies teacher at Cardinal Ritter

Recently, Armstead recognized the school had achieved and surpassed another important recommendation from the late 1970s survey. Defying national trends of only 2% Black males in teaching institutions, she realized that 40% of Cardinal Ritter’s faculty, staff and administrators are comprised of Black men.

“I’ve always put the statistics out there saying things like, ‘Hey Cardinal Ritter has 32% black males and so forth,’” Armstead recalled. “But, as they say, ‘a picture speaks a thousand words.’ When we took a staff photo, it hit me…almost 40% of our faculty and staff are black men. That was like “wow!”

“Wow” indeed. According to the Stanford Graduate School of Education, only 2 percent of America's teachers are Black men. Not having Black men in classrooms has an adverse effect on all students but it disproportionately impacts Black boys who do not interact with educators who look like them or may have shared their environments or experiences.

According to the National Education Association, as a group, “Black boys are usually at the bottom of statistical categories that measure educational attainment. This educational crisis starts the moment Black boys are born into a racist American society that applauds their athletic abilities yet shuns their intellectual capabilities.”

Dr. Craige Edwards, principal at Cardinal Ritter has been in education for almost 30 years, teaching at schools in the region. He said that being in an educational environment where Black men are the majority is an anomaly.

“I’ve been in situations where I was the only Black person in the building other than cafeteria staff. When I taught at Rockwood, there weren’t even any Black custodians in the building,” Edwards remembered. “So, I can say with absolute certainty that the kids respond positively. You’re in a very powerful position to mold the minds of kids who may not look like you but it’s even more powerful when they do.”

The Black male staffers interviewed for this article share Edwards’ zeal in their “powerful” role in molding young Black minds.

Randy Reed, a Hall of Fame basketball coach, was hired as the school’s basketball coach and athletic director in 2015. But throughout his 30 years, Reed said he always thought of himself as a teacher first. “Teaching is my passion,” he stressed.

In 2018, Reed said he walked away from teaching sports now serves as a Black studies teacher at Cardinal Ritter. He credits Armstead for realizing that “young Black males, in particular, need to see positive, Black male role models in school buildings."

“The fact that these young Black males can see educated Black men; men who know how to treat Black women; Black men who talk about their families; who aren’t out here leading negative lifestyles…they see all that up close and personal,” Reed elaborated. “Every day they’re making contact with them, seeing them, playing sports with them, hearing their lessons, seeing how they dress, walk and talk. When you consider some of the issues in the community these kids face, it’s just imperative that they have these Black male figures-probably now more than ever.”

“The effects of having strong men, family men, dressed nice, looking nice every day in the building…they (female students) see how a man should treat a woman; He’s not calling her out of her name or being disrespectful. They come to realize that the way Mr. Reed treats Mrs. Whoever, is how a man is supposed to treat a woman. It will mean a lot going forward in their lives.”

“Just watching Floyd Irons, I saw how Black men should walk and talk; how you should treat women, the family…just in how he interacted with us. He was that type of figure that molded, for me, how Black men should behave and also how we should always give back and never, ever forget where we came from.”

Eric Cooper who’s serves as Cardinal Ritter’s director of enrollment for the past six years, said that the Black male staffers all realize and appreciate their significance.

“We love Cardinal Ritter, the mission, the kids…everything about it,” Cooper said. “When you realize that only 2% of African American men are in education, we must celebrate our numbers because it’s an anomaly. When you realize our 40% rate and start looking at the impact we’re having on our kids, it’s simply amazing!"

The significance of their numbers is not overwhelming, Cooper added.

“It’s only heavy when it seems like a burden. If it’s something you’re passionate about then it’s never heavy. When you wake up every morning knowing you have almost 400 kids that’s going to look to you for guidance or structure or just to help them meet their purpose; that makes you smile, man!”

Ryan Johnson, who’s in his third year as Dean of students at Cardinal Ritter relishes the role he describes as “the bridge between students, teachers and parents.” His Black male co-workers, Johnson added, revel in their sense of shared responsibility.

“We use the term “Guiding 100.” It’s like back in the ‘60s when the mail man, the guy who owns the corner store saw a kid who wasn’t doing right…they were able to step out and say, ‘Hey, you know what you’re doing is wrong.’”

Johnson said the men at Ritter practice the ancient South African phrase, “Ubuntu” which means "humanity" or "I am because we are."

“We try to make sure we implement, talk about, and embody that every day. I always tell kids: ‘here, we are extensions of your parents. We’re your parents at school.’ We look at it like that and want to give them that positive feedback daily and the same teachings that they may get at home.”

Recruiting young, male Black teachers is easy to do in the proper environment, Armstead stressed:

“Think about it. If you have Black men in your building, well, Black men know other Black men, right? When we started hiring younger Black men, we asked them, ‘Do you know anyone that will be a good fit at Cardinal Ritter?’ It’s difficult to do that if you don’t have representation there in the first place.”

All the Cardinal Ritter Black staffers acknowledged that they work in an oasis of sorts surrounded by an environment of negativity and death that impacts, mostly, the young male demographic they serve. They agree with Armstead who opined in a recent press release that more schools could see a decrease in all-around negativity if they followed Cardinal Ritter’s example.

“When we look at all this gun violence,” Armstead said, “I have to ask, ‘Where would we be if all schools had such a strong presence of Black men?”

“There needs to be more college partnerships with high schools to attract more Black males into education. There needs to be some sort of pipeline at the sophomore and junior levels to do that. They need to put boots on the ground to make sure they show their faces at these schools and have conversations with these Black males and say, ‘Hey, these are the benefits of education, and this is the prestige associated with education.’”

The St. Louis community, Edwards added, must also do its part.

“Our community can do a lot more to celebrate Black males in education. Maybe just a spotlight on a Black male educator in our community, in the area. We need to get the word that says:

‘Hey, we are out here and we’re doing everything we can to make a difference in our student’s lives.’”