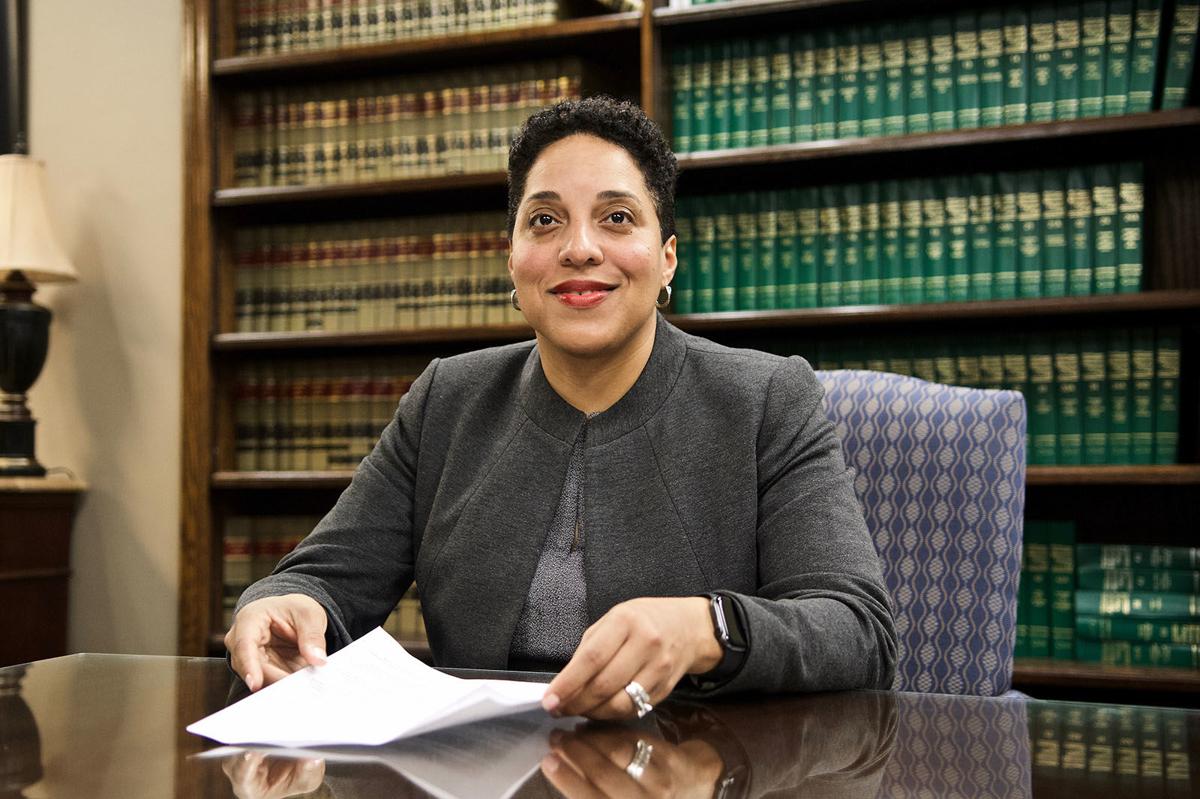 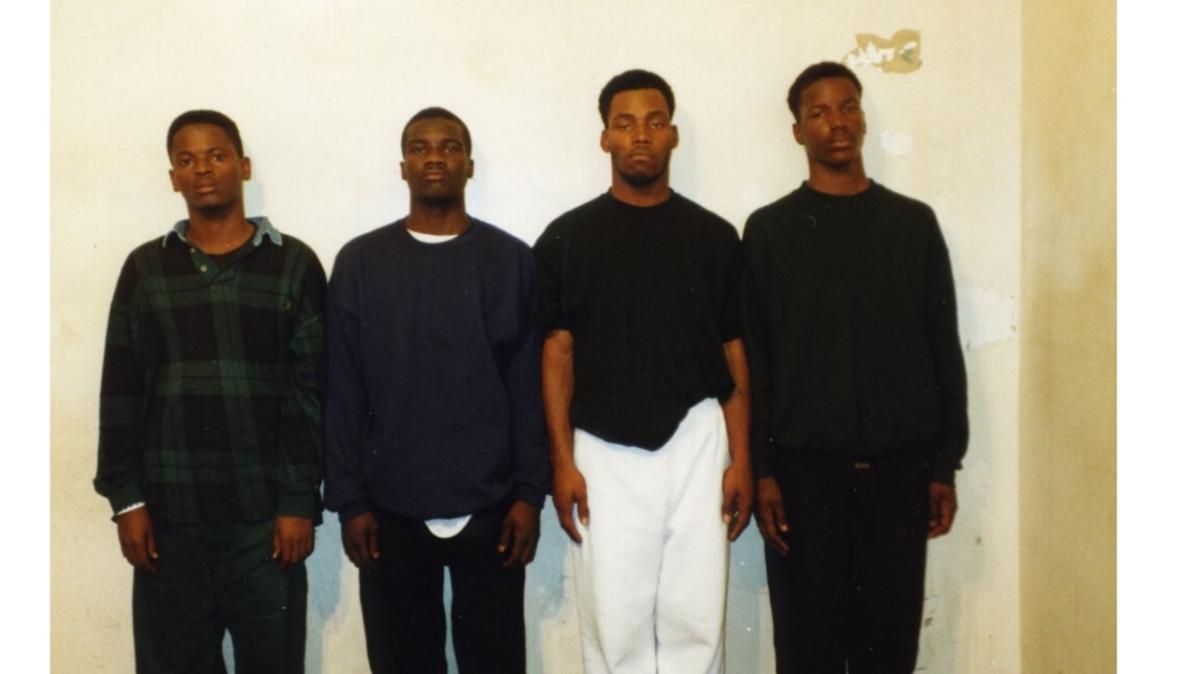 On November 3, 1994, Lamar Johnson (in white pants) was placed in a line up, where he was eventually identified as the murderer. Circuit Attorney Kim Gardner alleges that the eye witness who identified Johnson received payment from a former assistant circuit attorney. (Photo was part of the Circuit Attorney's Conviction Integrity Unit's report.

Twenty-four years ago, Lamar Johnson was convicted of murdering Marcus Boyd on Oct. 30, 1994, though evidence shows that Johnson was at a friend’s house and would not have been able to commit the crime.

On July 19, prosecutors filed a 67-page motion that attempts to prove Johnson’s innocence and grant him a new trial. It also provides evidence that the homicide detective allegedly made up witness testimonies, which the witnesses only learned about years later. It also provides documentation that an assistant circuit attorney paid off the only eye-witness and cleared some of his outstanding tickets.

The hearing for the motion will be held at 9 a.m. on Thursday, Aug. 1 at the Carnahan Courthouse in Division 16.

This is the first exoneration case Gardner’s new conviction-integrity unit has brought forth — and the first that any prosecutor in the City of St. Louis or St. Louis County has presented to the court — so the process of how the case will play out is still unclear, according to those close to the case.

In legal cases where both sides — the prosecution and defense — agree, then the judge usually grants the motions pretty quickly, said Tricia Bushnell, executive director of the Midwest Innocence Project.

“Why would anyone dispute it?” said Bushnell, who worked in collaboration with the Circuit Attorney’s office on the Johnson case. “Everyone is in agreement that he’s innocent. Why should he sit in prison for one second longer?”

Midwest Innocence Project has been working on Johnson’s case since 2008. However, the case hit a potential road block this week.

On Monday, July 29, the circuit judge who is hearing the motion, Elizabeth Hogan, ordered that the Attorney General’s office represent the State. The Circuit Attorney’s office represented the State in Johnson’s conviction, and Gardner’s team argued in the motion that the prosecutor has an obligation to right the wrong.

The American contacted both the 22nd Circuit Court and Assistant Attorney General Andrew Jacob Crane to learn why the judge would want to take away the Gardner’s power to represent the State in this matter.

However, explanations on the order were unclear.

However, Gross confirmed that the Circuit Attorney is supposed to be the State’s representation.

Hogan’s order raises questions about the court’s authority to make this move.

According to the attorney general’s website and state law, the office only gets involved in cases where “our office has been appointed to assist at the request of a local prosecutor or by direction of the governor.”

The court can appoint the attorney general’s office to be special prosecutors when local prosecutors have a conflict of interest in a case, the website states.

Hogan’s husband, Joseph, has represented several city officers in misconduct cases, and he is considered one of the St. Louis Police Officers Association’s lawyers.

The 67-page motion states that the incident occurred in the following manner. On Oct. 30, 1994, Marcus Boyd was sitting on the front porch of his apartment with his co-worker Greg Elking, who had come by to repay a small debt he owed Boyd for drugs and to purchase some crack. At the time of the shooting, Leslie Williams, Boyd’s girlfriend, was inside their upstairs apartment tending to their baby. Two black men wearing ski masks—Phillip Campbell and James Howard—ran up from the side of the house without warning. The men shot and killed Boyd, but Elking escaped and ran home.

At the time of the crime, Johnson and his girlfriend were at their friend’s apartment located at 3907 Lafayette in St. Louis, at least 10 minutes by car from the scene at 3910 Louisiana.

Detective Joseph Nickerson investigated Boyd’s homicide, and he interviewed Ed Neiger, who had purchased drugs from both Boyd and Johnson. In his report, Nickerson claimed that Neiger told him of a feud between the two and that the feud might be a reason Johnson would kill Boyd. Neiger disputed this account in his June 21, 1995 deposition, where he stated that he knew of no fights between Boyd and Johnson and he did not know of anyone who would want to kill Boyd.

The police report states that Leslie Williams told Nickerson she believed Johnson was responsible for Boyd’s murder and that there had been a dispute between them about missing drugs and stolen money. On June 21, 1995, Leslie Williams gave a pretrial deposition, wherein she stated under oath that Boyd and Johnson were once very close that they had drifted apart, but she could think of no reason that Johnson would want to kill Boyd.

Years later, four witnesses total would swear under oath that they never said what Nickerson attributed to them. The two perpetrators, Campbell and Howards, have also repeated signed affidavits that Johnson was not involved in the murder.

In the report compiled by Gardner’s conviction integrity unit, investigators found old files in the Circuit Attorney’s office where the only eye witness, Elking, was paid more than $4,000 to pick Johnson out of a line up. However, the documentation for these payments was never provided to the defense, even though Johnson’s lawyers requested it repeatedly over the years.

In fact, Elking later wrote a letter to his pastor that confessed to knowing what he did was wrong and trying to atone for his sins. This letter was included in the unit’s report.

The motion concludes, “The Circuit Attorney asks this court to take notice of ‘the perversion of justice which could occur if we were to close our eyes to the existence of newly discovered evidence’ and moves this court to grant the State’s motion for new trial because ‘in light of the State’s concession that the evidence exists, it should be heard.’”