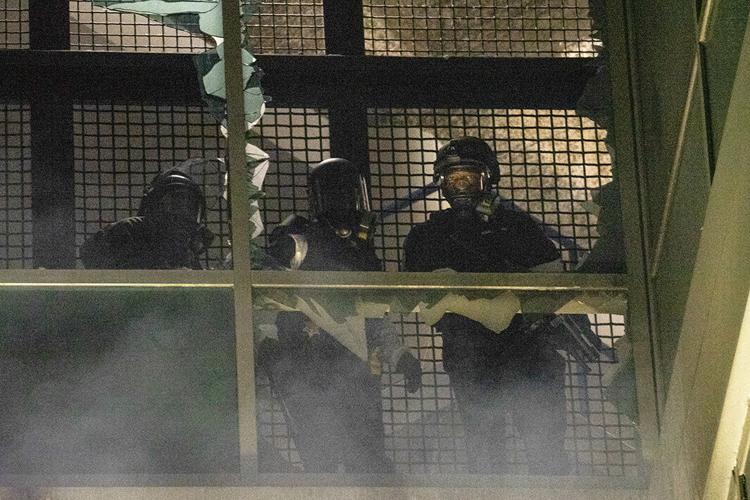 Law enforcement investigates smoke under the windows that were broken out by detainees at the St. Louis City Justice Center on Sunday, Apr. 4, 2021. 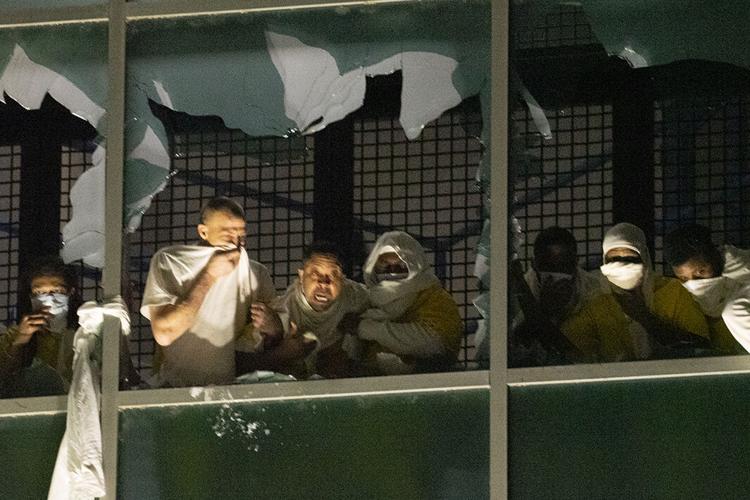 Detainees react to pepper spray during the uprising at the St. Louis City Justice Center on Sunday, Apr. 4, 2021.

Just under three weeks before City Justice Center detainees staged their fourth uprising since December, and amid numerous complaints of excessive use of pepper spray by jailers, the city put in one order for as much pepper spray as they had purchased in the previous six years combined.

The $17,379 order was approved by former Corrections Commissioner Dale Glass and included 100 sixteen-ounce “cell buster” canisters, 200 sixteen-ounce canisters and 500 three-ounce canisters, according to records obtained by The St. Louis American. This purchase came as detainee complaints about jail staff abusing the use of pepper spray accelerated through lawsuits and activist groups.

The allegations range from officers pepper spraying a detainee while he was having a seizure to officers using the chemical without warning or commands and then denying those men access to water and medical treatment following exposure.

The cell buster product includes an attachment to slide under doors and spray the chemical in an enclosed area, while officers carry the 3-ounce canisters on duty. The 16-ounce product is typically used for crowd control during a major disturbance.

Glass, who stepped down at the end of May, told The St. Louis American he has “long since retired” and declined to comment on the matter.

The March purchase was almost triple the amount of pepper spray corrections officials purchased in 2020 — which totaled $6,320.70 and was parceled out in multiple orders.

“Although some people can kind of confuse all the terms and just call everything the same thing, there are different chemicals in them,” he said.

Jumping to conclusions about the purchase is something Pat Mobley, an attorney with the MacArthur Justice Center, said he won’t do, but he said it does seem to support the stories he’s hearing from detainees. Mobley worked on the recent lawsuit filed against the jail alleging pepper spray abuse.

“I don't think it would be wise for us to hazard a guess at why they are doing this, but we also can't help but notice that excessive [pepper spraying] and buying lots of [pepper spray] seem to correlate,” Mobley said.

Use at the jail

The jail’s policy for using pepper spray says the chemical may be used when the staff’s safety is threatened or when an inmate is displaying active resistance. Any use of pepper spray requires a ‘use of force’ form be submitted, and in certain (more serious) circumstances requires written justification prior to using the chemical.

Heather Taylor, senior advisor to the city’s interim public safety director, said she is reviewing the jail’s pepper spray policies, incident reports and how the facility tracks its inventory. She said Mayor Tishaura Jones’ administration cannot with confidence say what accounted for the $17,000 purchase in March. The new mayor took office in April.

“And really, no one can give us an answer for all the things that happened before we got here,” she said. “But some of the stuff that was more concerning to me is the policies in place with tracking purchases.”

She and Jeff Carson, acting corrections commissioner, both confirmed the employee overseeing the pepper spray inventory logs went on extended leave under Glass’ tenure amid protests. It would appear no one was assigned the responsibility in her absence, and she has not returned to her post.

Carson, the former superintendent of the now closed Workhouse, is reviewing inventory records and use of force policy. He believes the large purchase, while excessive, was in response to past uprisings.

He confirmed July 23 the jail had 84 “cell busters”  in their inventory out of 100 purchased in March.

“I can tell you why it seems large, because of the three disturbances and then the one disturbance that they were to have 15 days [after this purchase] … now what made the order big is the cell busters, which I would have done something different, but I'm not trying to micromanage what the jail did,” Carson said.

With 329 uniformed officers employed at the Workhouse and the CJC at the time — who are all now stationed at CJC — Carson did not think the 500 smaller canisters was an excessive purchase. He confirmed that both facilities ordered through the same office, meaning the inventory reflects products used at both jails.

Carson also noted city departments are forbidden from submitting orders from April through about mid-July as the next year’s budget is put in place, citing that as a possible reason for the large order.

However, over six years of pepper spray purchase records illustrate inconsistent demand for the product within the city’s two jails:

Prior to the federal government expanding the availability of pepper spray, it conducted a pilot program and found using pepper spray reduced the time needed to contain violent incidents to 2.73 minutes, from 4.34 minutes, according to a 2015 report by The Marshall Project.

The CJC’s policy mandates that all corrections staff receive four hours of training on how to use the chemical before they are issued a canister to carry while on duty. Employees are strictly prohibited from using the spray as a punishment on inmates.

But that’s exactly what a recent lawsuit alleges is happening.

The stories of abuse at City Justice Center detailed in the lawsuit seem endless — but there’s a common thread through them all: detainees say correctional officers are excessively pepper spraying inmates and withholding access to clean water and medical treatment as punishments.

One of the plaintiffs, Derrick Jones, said he was pepper sprayed after requesting to move to a different cell because his cellmate was showing signs of COVID-19. Jones says he was then taken to the ground, kicked, handcuffed and pepper sprayed again. Instead of providing him with a change of clothes and medical attention, Jones said a lieutenant told other officers to “let him marinate.”

His mother, Catrese Howard, told The St. Louis American she’s overwhelmed by the way her son has been treated in the jail and said she has not been able to once get in touch with someone at the facility about the conditions.

“It is really unfathomable just to know no one has been held accountable for the things that have happened to my son — like a caged animal in so many words,” Howard said. “You know, my son has said that to me before, ‘Mom, they treat me like an animal.’”

Schwarz, the Washington University doctor, said that if someone does not receive treatment — like the situation multiple detainees say they’ve been in — a person’s body will produce tears and eventually the chemical will leave sensitive body parts.

“So, it just depends on where it's made contact with you and how bad that contact is. … it’s rare for it to cause long-term damage,” Schwarz said.

Taylor said it’s difficult to prove exactly what went on when it comes to those allegations, because if the medical wing is not notified of a pepper spray incident and no report is made by the corrections officers, there’s no way to record whether inmates received treatment.

“Medical not being notified — we know that has likely happened,” she said. “We've seen some of the reports that are problematic. That's why there are a number of lawsuits. I can't discuss the lawsuits but people tell you that; and in seeing some of that, especially with the last administration, we should have gotten ahead of a lot of these things that were happening and buying $17,000 worth of [pepper] spray without a detailed inventory list of expirations — it’s very concerning to see that.”

Maureen Hanlon, a staff attorney with ArchCity Defenders, previously told The St. Louis American that because most of these detainees are being held pretrial, they legally cannot be punished.

“And so, to the extent that [pepper spray] is ever used in any way, not for security purposes or not against someone who is aggressive or harmful but against people who are passively resisting [or] non-resisting, [pepper spray] has been given without warning [and] is used to inflict pain. All of those are completely inappropriate uses of [pepper spray].”

The CJC has seen at least four major uprisings since December.

Two protests occurred just before and on New Year’s Day. Each time, the inmates refused to return to their cells in protest of inadequate protections against COVID-19 for those being held there. Then, in early February, 117 inmates took over the north side of the fourth floor of the jail, breaking the windows and throwing debris down onto the sidewalk and street. The fourth uprising occurred the night of Easter Sunday and was like February’s protest, but this time on the third floor.

Former St. Louis Mayor Lyda Krewson created a task force to investigate conditions at the jail after the protests. They presented a list of recommendations for jail improvements— over 60 in total, but 13 deemed matters of urgency.

The task force’s 40-page report included comments from District Defender Matthew Mahaffey, who reported that about 148 calls have been made to the ArchCity Defender hotline to date regarding conditions at the CJC including isolation, use of pepper spray, overall conditions and the time it took for COVID-19 testing results.