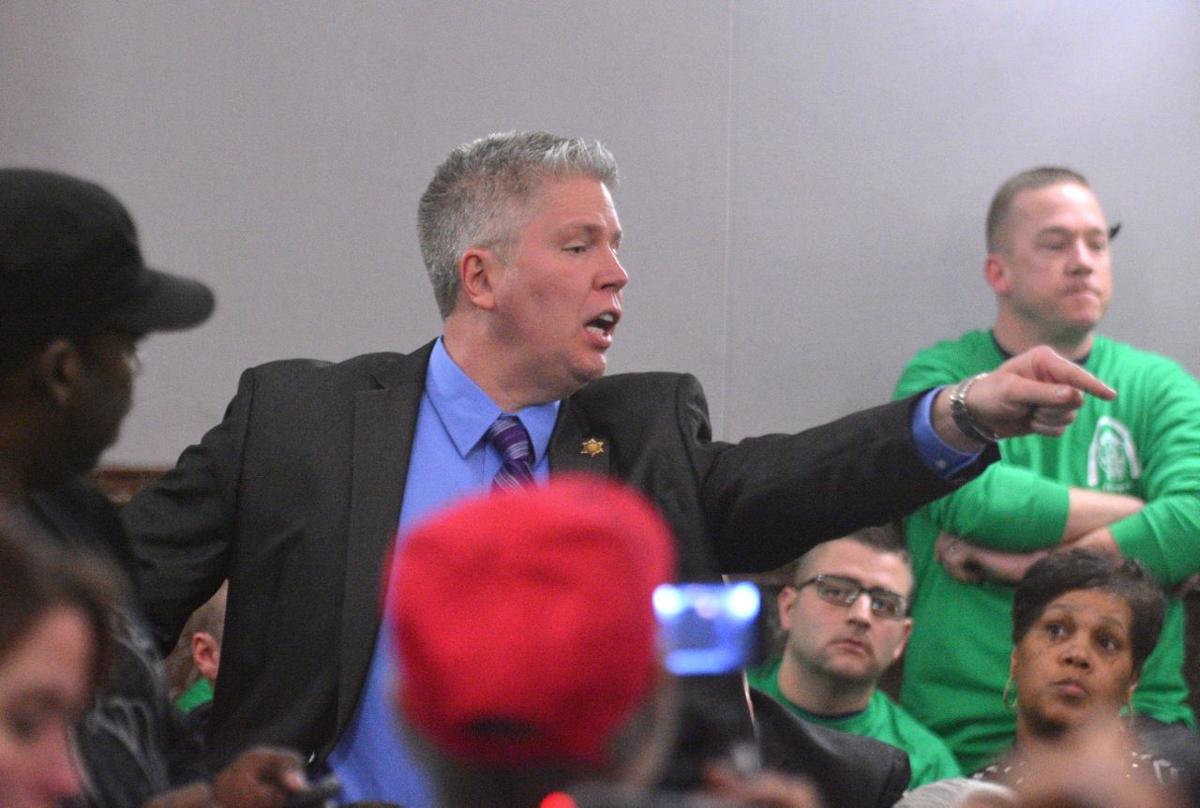 Jeff Roorda, business manager for the St. Louis Police Officer’s Association yells to the public safety committee chairman Alderman Terry Kennedy, “How about some order here?” Wednesday night. A scuffle broke out between members of the police association officers and citizens during the proceedings but was quickly brought under control. 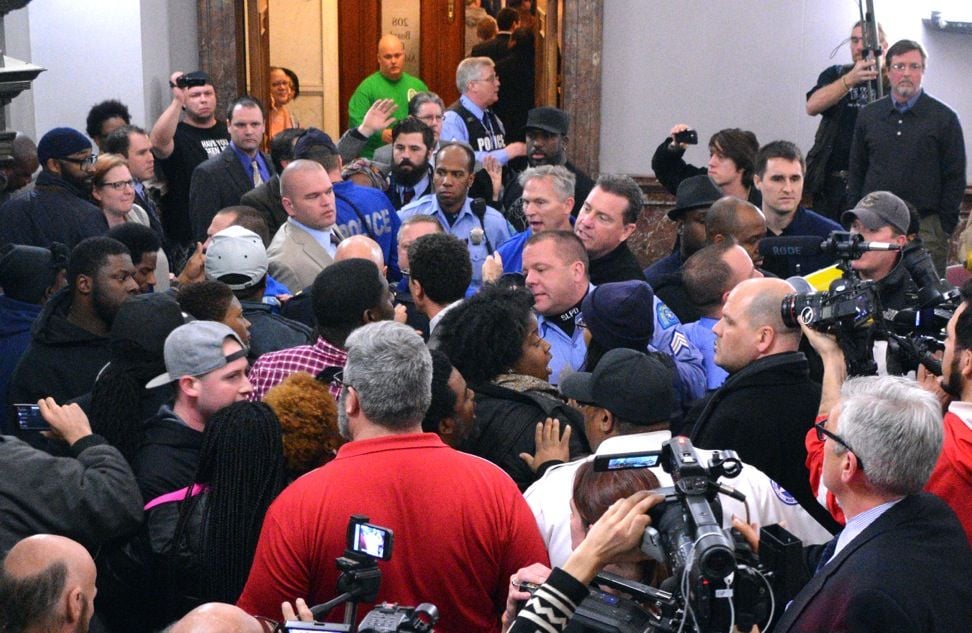 The Public Safety Committee of the St. Louis Board of Aldermen held a public hearing to receive public testimony on Civilian Review for the St. Louis Police Department Wednesday night. A scuffle broke out between members of the police association officers and citizens during the proceedings but was quickly brought under control.

Jeff Roorda, business manager for the St. Louis Police Officer’s Association yells to the public safety committee chairman Alderman Terry Kennedy, “How about some order here?” Wednesday night. A scuffle broke out between members of the police association officers and citizens during the proceedings but was quickly brought under control.

The Public Safety Committee of the St. Louis Board of Aldermen held a public hearing to receive public testimony on Civilian Review for the St. Louis Police Department Wednesday night. A scuffle broke out between members of the police association officers and citizens during the proceedings but was quickly brought under control.

Roorda, who was sitting in the audience, had just finished yelling to the Public Safety Committee chairman Alderman Terry Kennedy, “How about some order here?”

His comment came after a police officer was trying to give his testimony on proposed legislation to establish a civilian oversight board on police work, but was interrupted by some attendees. Hundreds packed into the aldermanic conference room, where people were standing in every space available and in the doorways.

Kennedy responded to Roorda, saying, “Excuse me – first of all, you do not tell me my function.”

After hearing this, Roorda rose from his seat and was trying to move through the tightly-packed crowd towards the front of the room. In the process, he tried to push a black woman, St. Louis resident Cachet Currie, out of his way.

According to Currie’s attorney Jerryl Christmas, Currie was trying to leave the room when Roorda allegedly shoved her from the back and pushed her to the ground, breaking her glasses and scratching her forehead. The scratch on her forehead was visible.

Yelling and name-calling ensued. Police officers held Roorda back as he tried to charge at people in crowd. Roorda left the building, and Kennedy adjourned the meeting soon after. No arrests were made.

Roorda also had displayed his “I am Darren Wilson” bracelet in clear view during the meeting. Wilson, of course, was the Ferguson police officer who killed Michael Brown Jr. on August 9, sparking renewed public interest in civilian review of police.

Currie gave her report to police on Wednesday night after the incident, along with several other people. When Currie went to check on her report’s status on Friday, police still had not filed it with the circuit attorney’s office, Christmas said. When police want to file charges against protestors, he said there is never any hesitation.

“But when we have to deal with the law enforcement, there is always a delay in justice,” Christmas said. “As Dr. Martin Luther King Jr. said, ‘Justice delayed is justice denied.’”

Circuit Attorney Jennifer Joyce began investigating Roorda for assault the next day on January 29 and served subpoenas to several media outlets for their video and audio footage of the meeting that day.

In an interview with CNN, Roorda said it was the “anti-police radicals” that started pushing him and other officers first.

Christmas likened Roorda to a modern-day Bull Connor, who was the public safety commission in Birmingham, Alabama, during the Civil Rights Movement who led the effort to preserve racial segregation.

“His behavior is a perfect example of why we need police accountability,” Christmas said. “He is always going to distract people from that conversation.”

The purpose of the hearing was to allow public comment on the long-awaited bill to establish civilian review of the police department, which Kennedy introduced on December 5.

In 2006, Kennedy championed a bill for a civilian oversight board that passed the Board of Aldermen but was vetoed by Mayor Francis Slay. The new bill (BB 208) has 15 sponsors, including Alderman Stephen Conway, Alderwoman Lyda Krewson and Slay himself. All helped to defeat the 2006 bill.

The bill authorizes the oversight board to review citizen complaints, as well as Internal Affairs investigations. As the legislation is written now, the board would have the power to send investigations back to Internal Affairs with recommendations for further questions or additional evidence that is needed.

If the board is still unsatisfied, it can conduct its own independent investigation and make recommendations to the police chief regarding discipline.

The bill also gives the board access to all documents and allows for some monitoring of Internal Affairs investigations.

After the meeting, Roorda publicly announced that if the aldermen passed the legislation, police would do the bare minimum while on patrol or quit the force.

John Chasnoff is among several people who have been working on civilian review legislation for years. He said they have researched “the lessons learned” from some 100 similar bodies nationwide.

“It’s time for a new era of accountability,” Chasnoff said.

He said Roorda’s threatened slowdown was an act of intimidation and reflects a “lack of understanding of modern policing and the priorities of the people.”

The Organization of Black Struggle released a statement on Monday, urging the city police union to fire Roorda as its business agent and media contact.

Quibbling with the bill

Jamala Rogers, one of the co-chairs of the Coalition Against Police Crimes and Repression (CAPCR), worked on the draft of the current bill and on previous versions. In her testimony on January 28, she said people worldwide are watching St. Louis because of the Ferguson movement.

“We have a lot of opportunity to dig ourselves out of the racist hellhole and institutional racism,” she said. “We also have the advantage of lessons learned from other failed civilian oversights.”

Rachel Jones, a 27th Ward resident, testified and pointed to several parts in the legislation that need to be made more clear. She told a personal story about being called the N-word by a police officer recently, and said the bill did not clearly state where she would report an Equal Employment Opportunity Commission complaint.

She also responded to another speaker’s comment about requiring a certain education level to be a member of the civilian oversight board. She said there is no such requirement for people to serve on court juries.

“His statement actually reminds me of something reminiscent of the Literacy Acts prior to the 1965 Voting Rights Act,” Jones said.

Some expressed that the bill gives the mayor too much authority over the board’s membership. The bill allows the mayor to nominate seven members of the board by choosing from the aldermen’s recommendations. The aldermen have authority to confirm or reject those nominations. A public hearing on the nominations is required to allow for public input.

Rogers said this was a compromise, as opposed to giving the mayor full control of appointing the board’s members without aldermanic or public input.

The bill includes alternative mediation, which will allow citizens to sit down with the authorities and officers involved to voice their concerns before going through an investigation.

Montague Simmons, of the Organization for Black Struggle, said the meeting started off on “a very good path,” but he feels Roorda intentionally disrupted the meeting. However, many people stayed and wanted to continue the discussion, which showed the people’s commitment to the issue.

Simmons said he believes the legislation will be even stronger than the civilian oversight bills that almost became law in 2006.

“The push is stronger than it was in 2006 because of the uprising,” Simmons said. “There are eyes on police accountability that we didn’t have back then.”

“I can’t come and play politics with you,” he said, “because when I leave here, the same officers watching us in this room will possibly pull me or my friends over and lock us up.”

Can someone allow the same amount of newspaper space to focus on and talk about the thousands of hungry poverty stricken children currently living in this city? So much more can be gained.