The first week in office for St. Louis County Prosecutor Wesley Bell included firings, changes on what to prosecute – and leaks to the media of an internal policy document, which was in part misreported.

The most controversial of the interim changes to date was moving nonpayment of child support out of criminal court to civil court.

“If you start with a criminal matter, the person is prosecuted; if they get probation or incarceration, the child support still accrues and, when they get out, it’s harder to get a job, it’s harder to get  employment, housing – because they have that felony conviction,” Bell told The American.

“Or, we can do the civil route, which is what the city does, which is what St. Charles does, primarily, and most of the state has done. The child support is a civil order, and if they are in contempt of that order, a judge can incarcerate them for worst-case offenders.”

In 2017, Bell said St. Louis County prosecuted over 530 cases. as opposed to the average county in Missouri that only prosecuted about a dozen, while the City of St. Louis prosecuted less than 40.

“We are getting St. Louis County in line with the rest of the state and this is a policy that effectuates what we actually wants, which is for people to be able to take care of their family,” Bell told The American.

Putting child support nonpayment cases in civil court does not leave children without the non-custodial parent’s support, Bell told The American. He does not want someone to go to jail for being poor. A jailed parent who can’t afford to make bail for release cannot get or maintain a job or make a good-faith effort to pay child support, and it creates greater personal and family instability.

“The worst-case offender who is incarcerated in a civil matter doesn’t have that same stigma of a felony conviction on their record,” Bell said. “It’s not going to be as hard for them to get a job; they don’t have to check a box.” 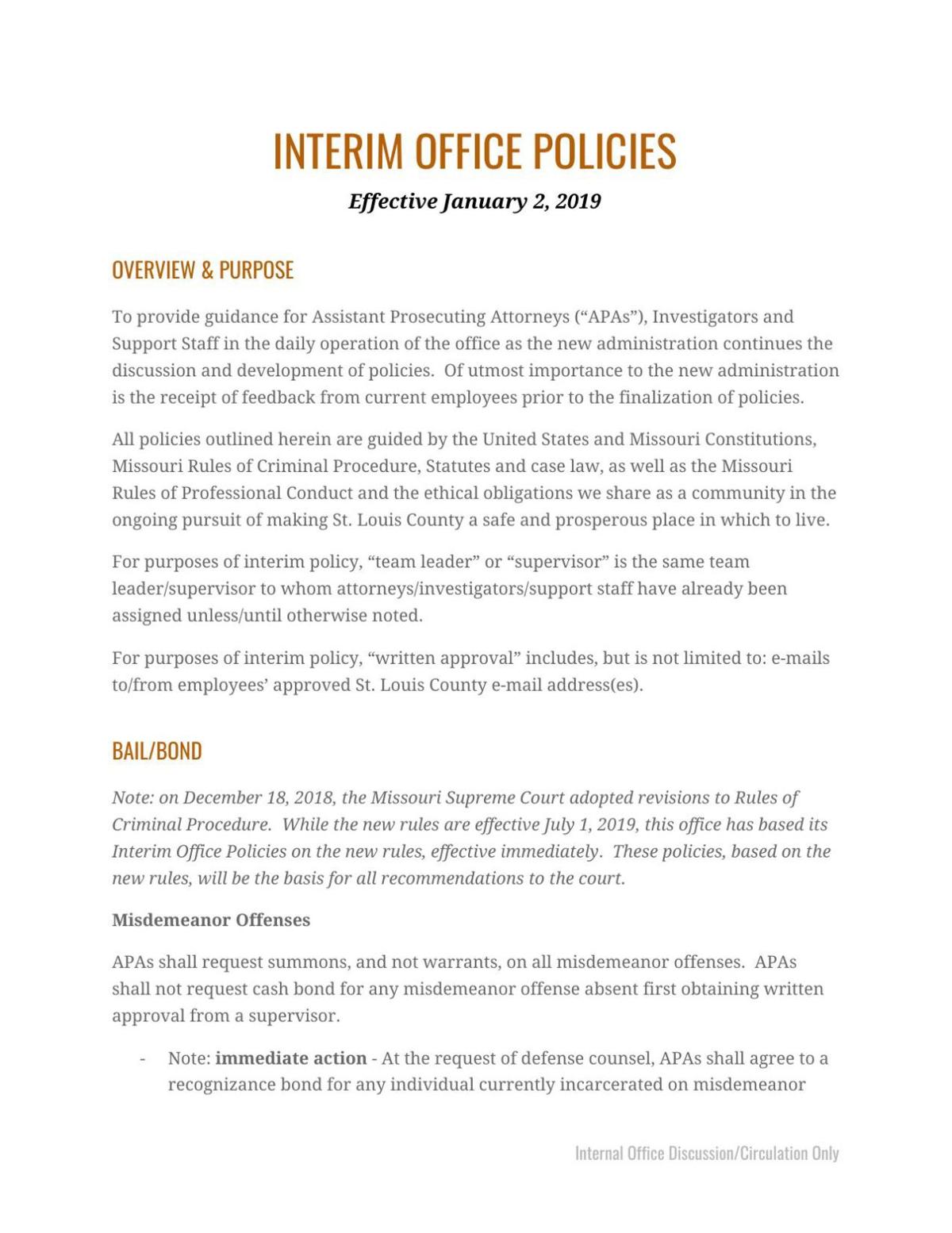 For pending cases, the office “will not proceed with or attempt to accept any plea/finding of guilt for felony or misdemeanor marijuana possession, regardless of the amount, without written approval from supervisor.” For probation violation and bail/bond conditions, he directed prosecutors not to file or purse motions to revoke probation arising solely from the use or possession of marijuana.

The office put into effect immediately the revisions to Rules of Criminal Procedure of the Missouri Supreme Court that are to be effective July 1. This includes issuing summons rather than warrants on all misdemeanor offenses, with no requesting cash bond for any misdemeanor offense without written approval from a supervisor. If the defense counsel requests, prosecutors will “agree to a recognizance bond for any individual currently incarcerated on misdemeanor offenses.” There are some exceptions, requiring written approval from a supervisor, when the witness or victim exhibits signs of physical injury or there is convincing evidence that there is a danger to the witness or victim.

The same directive applies to Class D and E felony offenses. Class D felony charges include resisting arrest, fraud, passing bad checks, among other offenses, and can result in fines up to $10,000 and seven years in prison. Class E felonies include some assaults, abuses, and acts of criminal negligence and convictions and can bring up to $5,000 in fines and four years in prison.

In probation violation matters, prosecutors will not pursue “motions to revoke probation arising solely from failure to pay legal financial obligations and/or restitution unless a hearing has been held regarding the defendant’s ability to pay and the court has made a ruling finding willful nonpayment.” This applies but is not limited to court costs, intervention fees, and fees associated with conditions of supervision, such as electronic home detention.

“We’re going to proceed with getting impact and input from not only this office’s attorneys and staff, but also stakeholders, to make sure we come up with sound policies,” Bell told The American. “But as an overriding principle, I do not believe in prosecuting poverty. We’re not going to operate the courts as debtor’s prisons.”