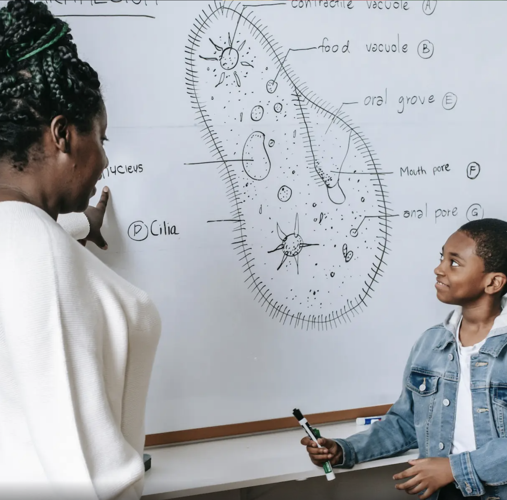 leads to students not understanding what jobs are in the field, let

alone how they could fit into it.

Last year, an elementary school principal in rural Mississippi wanted to get her students excited about science. So, after receiving grant funding, she bought robots for third and fourth graders to assemble and then held a white coat ceremony for them, complete with their names embroidered on the jackets.

Though she’s been principal for three years and has worked in schools for the last decade, Alicia Conerly, Ed.S., comes from a science background.

“I know and understand that if you don’t pique the interest of children early, the odds of them, once they hit middle school into high school, if they don’t already like it or find something that they enjoy about it, they won’t go into STEM career fields,” Conerly says. “So I wanted to change that.”

It worked. Every “STEM Pioneer” successfully assembled and programmed their robot. And the reception, complete with a photographer and certificates, motivated younger students in the school.

But without the grant — and donors for the ceremony — this wouldn’t have been possible. And Black students, especially from a young age, need to be exposed to engaging STEM activities to understand the options they have and see themselves in the field.

Though we’re finding representation in superheroes and mermaids, it’s harder to come by in STEM. Of course, Dr. Kizzmekia Corbett and Dr. Marcella Nunez-Smith were key figures in creating the lifesaving COVID vaccines, but even they didn’t get the celebrity treatment.

As the saying goes, you can’t be what you can’t see. Conerly was the first Black administrator in her building, and as soon as she became principal, students kept telling her they wanted to grow up and be a principal.

“There is not enough representation on any level, and especially in the STEM career fields,” says Conerly, who is also a member of the National Science Teaching Association.

A new Pew Research Center poll of Black Americans found that Black adults cited seeing more Black high achievers in STEM fields as the most effective way to get young Black people interested in the field. And about a quarter of respondents said having a Black teacher in these areas while in high school would also help. And, as of 2019, only 8% of science teachers in the United States were Black.

When identifying reasons that young people don’t pursue college degrees in STEM, half of Black adults said they don’t have access to quality education, and they don’t have mentors or adults encouraging them to go into these fields.

And, Pew found, Black adults find STEM professions aren’t welcoming to them. Among the professions listed, only 28% of respondents said the medical profession was welcoming, along with 23% for engineers, and 20% for scientists.

While the majority (81%) of Black adults who work in STEM recall largely positive experiences in their most recent STEM classes, about half (48%) say they experienced being treated as though they couldn’t understand the subject, were made to feel like they didn’t belong in the class, or received repeated negative comments about their race or ethnicity.

A separate Pew study, this one from 2021, found that Black people are still highly underrepresented in the STEM workforce, making up only 9% of those in the industry, compared to 13% Asian and 67% white. The largest group works in health jobs (11%), followed by math (9%) and computer (7%).

This leads to students not understanding what jobs are in the field, let alone how they could fit into it.

So it’s even more important to make sure students are introduced to STEM in early grades. This allows them to understand the concept and make real- world applications. Dr. Denise Johnson, the middle grades program coordinator at Winston-Salem State University, leads two STEM programs, one that helps students with math and reading, and another that allows them to work with data collection, coding, and robotics.

“Teachers who are teaching math and science also have a great responsibility and opportunity to engage our students and our young people in ways that will generate interest in choosing these careers,” Johnson says.

A North Carolina university is on a mission to recruit and train more Black STEM teachers, creating the Next Generation Black STEM Teacher Network. Through a grant from the U.S. Department of Education, the program supports a max of 50 students across five HBCUs toward becoming highly trained STEM teachers. Now in its first year, there are 40 students going through the training.

The group, which is spread across four states, has monthly virtual sessions with different professional development activities, like creating lesson plans. Though they don’t all regularly convene in person, aside from their virtual meetings, they have other online platforms to connect.

“The goal is to be sure that they develop this camaraderie along the cohort so that, once they are in their own classrooms and teaching, if they have a question or an idea, they can share it with one another,” says Dr. Kim D. Pemberton, the Department of Education chairperson at Winston-Salem State University, who leads the Next Generation program with Dr. Johnson.

So it’s important that Black students see themselves represented in the STEM fields and are encouraged to pursue them the same way their peers are. When the seeds are planted, and doors are opened, students know it’s a possibility, Pemberton says.

“Knowledge is power,” Pemberton says. “We have to make them aware of what is available for them.”