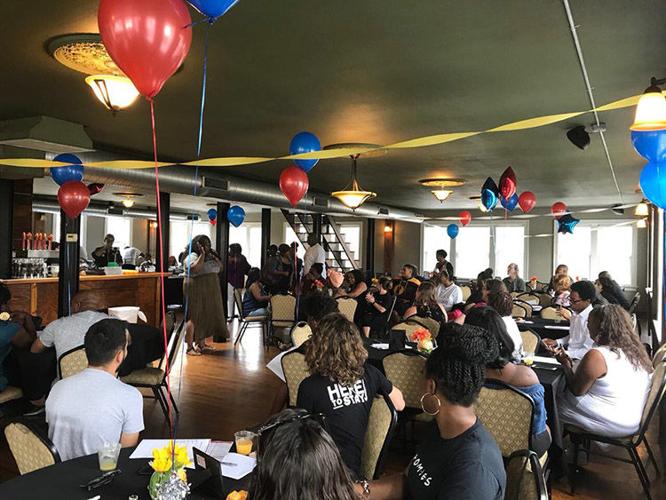 Organizer Kayla Reed speaks to WokeVoterSTL troops at the Ferguson Brewing Company on July 21. Candidate Wesley Bell is taking notes to the right. 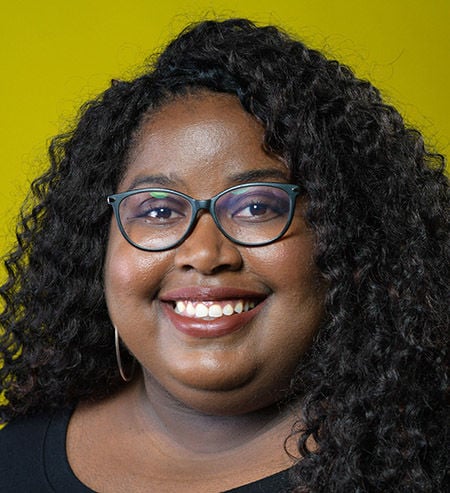 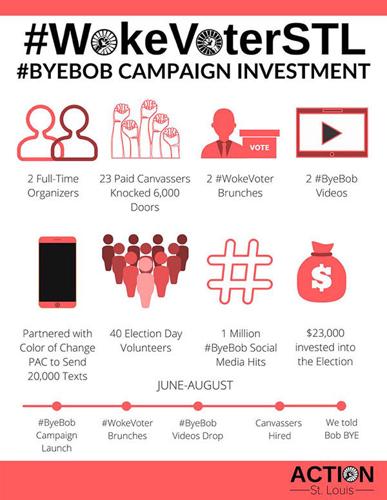 On a cold night in November four years ago, I sat in a small room with other activists who had been protesting for months in Ferguson and watched Bob McCulloch smugly announce that no charges would be brought against Darren Wilson, the officer who killed Michael Brown. With tears in my eyes, I left the house and joined thousands in the streets to protest this injustice. I never forgot his face on the TV screen that night, nor his half-hearted apology to the family for their loss.

That night we all came to an unanimous, nearly unspoken agreement – Bob McCulloch must be removed from office, no matter the sacrifice or effort it would take.

Wesley Bell’s victory and Bob McCulloch’s defeat is a testament to the strength of grassroots organizations in St. Louis. For the last four years we have been in the streets, yes, but we have also grown our organizations, developed new organizers, and launched campaigns around issues of justice that have shifted the public narrative and changed thousands of hearts and minds.

We began to lay the groundwork for this victory August 9, 2014 after Mike Brown was shot down in broad daylight. Despite the pushback many of us experienced towards our commitment to protest and direct action, our conviction that no black person should endure the indignities Mike Brown did meant that our moral clarity was sharper than ever. Many of us who had never organized an event or meeting in our lives would soon be catapulted into leadership.

For example, those four years ago I was working two jobs as a pharmacy technician and furniture salesperson. Now, I have founded and currently lead Action STL, a black-led grassroots organization formerly known as St. Louis Action Council.

Action STL launched our first campaign, #WokeVoterSTL, in 2016. The #WokeVoterSTL campaign is committed to year-round political education, and we focus on key candidate races and ballot initiatives that we will feel will have a massive impact on the black community and, therefore, improve the entire St. Louis region. We worked to get Kimberly Gardner elected as the circuit attorney in St. Louis, fought against voter photo ID in 2016 and Prop P in 2017, and ran an independent campaign for Tishaura Jones when she ran for St. Louis mayor. With each campaign, our small team of newly-minted organizers became more strategic and effective.

Fast forward to May 2018. With four years of anticipation under our belts – McCulloch was re-elected five days before Mike Brown was killed – we were prepared to give our all in this prosecutor’s race. As an organization, Action STL decided this was the only race on the August ballot we would focus on. We felt that it was the most important race on the ballot – and, for us, it was personal.

We found out Wesley Bell – professor and Ferguson City Council member – was running in February and knew his campaign faced several challenges from the beginning. For starters, August elections typically have the lowest voter turnout. Many voters didn’t know McCulloch was on the August ballot, and most had no idea there was a viable candidate running against him. The odds were very clearly stacked in the incumbent’s favor, and that didn’t even include the fact that he already had $200,000 in the bank. But, our moral compass told us we still had a chance.

We also knew that, for some voters in the county, it didn’t matter who the challenger was. This out-loud charge to finally get Bob McCulloch out of office was going to be enough to mobilize thousands of black voters who had been directly impacted by his administration over the last three decades. So, to fully reach and represent our community, we knew our ActionSTL work needed to be geared towards ousting Bob.

He was Goliath, and we were David. With this in mind, we decided on the hashtag and launched #ByeBob.

In partnering with Color of Change PAC – a national political action committee dedicated to electing progressive prosecutors – we collaborated on a digital and communications strategy. This included articles, memes, infographics and videos, all made with the goal of creating an accessible conversation around this race. We needed to incite the same anger that brought people to the streets. We had to make sure folks understood that Bob was the reason Mike didn’t get justice.

The other important part of this election is that Bob underestimated us. He didn’t show up when invited to public debates. He was arrogant from the start – much like he showed himself to be in 2014 – and we used that against him.

Our #WokeVoterSTL #ByeBob work included many sites and communities not regularly noticed, let alone prioritized, for local primary races. Action STL spent April and May registering hundreds of North County high school seniors to vote. In June we focused on voter education and worked to demystify the role of the prosecutor with our #WokeVoterSTL brunches held in Ferguson and Dellwood. We talked about cash bail, pre-trial detention, sentencing and diversion programs so that voters understood all that was at stake with this election.

In July we hit the field. The last two weeks of the election, we hired 23 canvassers and knocked on 7,000 North County doors. Our partnership with Color Of Change PAC resulted in over 50,000 text messages sent and over 2,000 calls made on Election Day.

As voting hours wound to a close, we stood in popular North County intersections urging folks to go vote as they came home from work. In the end, #ByeBob accumulated over 1 million social media impressions and voter turnout in North County more than doubled, which was key if Wesley was going to win.

It wasn’t just #ByeBob or Action STL that made this victory possible. ActionSTL shared an office with Rev. Cassandra Gould and Missouri Faith Voices as they called thousands of voters to educate them on the race. We laughed together, held strategy meetings, fed each other and created an open door atmosphere for anyone who wanted to volunteer or learn more about the election. These efforts were multiplied by orgs like Organization for Black Struggle joining us for weekly coalition calls.

We had a shared calendar and promoted each other’s events surrounding the election. We split North County up, and we all owned our part. This was in addition to the many groups – ACLU and MomsDemand among them – working in all parts of St. Louis County to encourage voter education and voter turnout, and many of them did not endorse a candidate either.

Overall, our organizing most prominently centered on turning over a new leaf for the county, and requiring voters to step into their power and take ownership of their role in shaping the St. Louis they wanted to see.

Our coalition coordination was key, and Wesley’s campaign grew stronger as the months carried on. In addition to having a talented campaign team, he built on the energy surrounding #NoOnPropA, energized local volunteers, recruited national support and, ultimately, did what he needed to do to secure victory.

Now it’s time for Wesley to turn those campaign promises into reality and usher in an era of criminal justice reform.

This was a huge win for St. Louis and for the national movement that was sparked after Ferguson. Ultimately, the reality is that Bob McCulloch was elected the same year I was born, which means there is an entire generation of St. Louis County residents who have only known him as prosecutor. He unjustly prosecuted thousands and consolidated Democratic Party power for decades, and we changed that on August 7. We brought down an entire institution when everyone counted us out. We defeated Goliath.

This win is for all the families who were denied true justice under his tenure.  This win was a testament to our power, our organizing and our commitment to justice. This win is a message that we are only getting started.

This win was for Mike Brown.