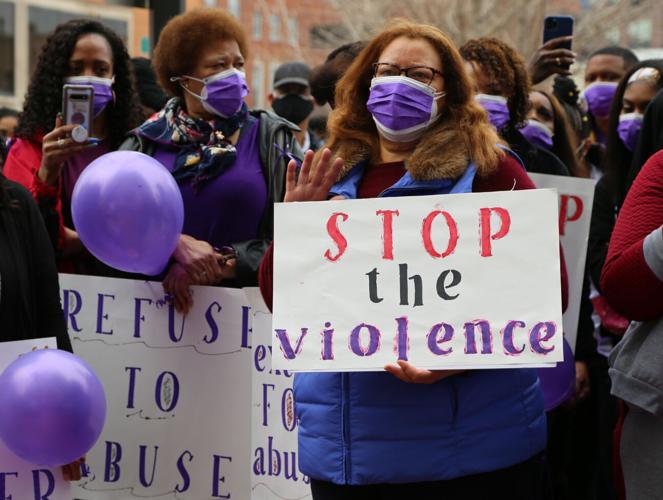 Family, friends, elected officials, local agencies and organizations who support and advocate for victims of domestic violence, held a ‘Rally for Rosey' on Saturday, March 13, 2021, in downtown Clayton, Missouri, outside of the St. Louis County Courthouse, to pay tribute to Rosey McCulley, Kayden Johnson and Kaylee Brooks and shine a light on domestic violence. Police said Bob McCulley III was responsible for killing his wife Rosey and her two children, Kayden and Kaylee, on March 4, 2021, then taking his own life on March 5, 2021. Roseanne was 34-years-old and Kayden and Kelley were 13 and six years old.

Among the messages made clear on Tuesday’s primary election day were:

There is no longer room in St. Louis city politics for candidates with credible histories of alleged sexual assault and domestic violence.

We speak, of course, of the failed candidacies of state Senator Steve Roberts, Jr., and former Governor Eric Greitens.

Roberts’ campaign for the First Congressional district, billed as “The Revenge of Lacy Clay,” ended in one of the largest electoral losses in St. Louis history. By 9:30 p.m., the race was called for incumbent first term Congresswoman Cori Bush, who ended with a nearly 43-point lead over Roberts. In St. Louis City alone, Bush received 71% of the vote to Roberts’ pitiful 25%.

Who knows what drove his decision to challenge Bush, a formidable opponent. It seemed driven as much by personal angst and a need to try to restore some relevance to the Roberts brand in politics after several humiliating defeats of family members at the polls, as well as an attempt to purge young Roberts of any public stain. There were also urgings from self-interested parties anxious to find a possible path to return to political relevance. It was an ill-fated collaboration. When Roberts’ defeat seemed almost certain, there was very little full throated public support for him from his presumed political allies.

Voters do, in fact, care about the personal history and personal baggage that a candidate brings to the ballot because many voters, as well as their friends and families, have lived through the type of violence alleged against both Roberts and Greitens.

Among the miscalculations of Roberts’ campaign was an unforced error of his own doing related to his very public history of sexual assault and abuse allegations. Instead of focusing on issues important to voters, Roberts doubled down on his protestation of innocence of any misbehavior with women and spent weeks trying to smear an ex-girlfriend. The results of his claims gave him no traction with voters, and women voters in particular.

Roberts relied largely on out-of-state and Republican financial support to fund his campaign - ultimately to his detriment. In addition, his father, former alderman Steve Roberts Sr., was also identified by a national publication as being the largest donor to “YACHAD PAC,” a right-wing, pro-Israel political committee that spent hundreds of thousands of dollars attacking Bush with racist attacks.

His mailers in the last week included Republican talking points and instructed voters to “ask for a Democrat ballot” -- something that Democratic voters usually don’t have to be told to do. Roberts’ campaign strategy also seemed to rely on drawing more Republican voters to cross over and vote as Democrats - somehow forgetting that the Republicans had their own contentious primary.

Perhaps an example of the futility and ineptness of Roberts’ campaign was the flaccid get-out-the-vote (“GOTV”) effort on election day itself. The campaign had very little presence at city polling places throughout most of the day, and the poll greeters who did show up ended up at locations in Bush strongholds. If Roberts had the once vaunted “Clay Machine” behind his campaign, as he touted, that machine, has become outdated, riddled with malfunctioning systems and broken parts.

Roberts simply failed to show any modicum of political astuteness or craftiness throughout his campaign. After Tuesday’s overwhelming loss, he also can’t feel too confident in the security of his state senate seat, where he is up for re-election in 2024, if he chooses to run.

Similarly to Roberts’, disgraced former governor Greitens’ (who had been leading in the polls for months) saw a steep decline in support after he became the target of ads depicting his wife Sheena Chestnut Greitens’ charges of domestic abuse. But after a well-funded anti-Greitens PAC started to run blanket ads, he lost his position as frontrunner and the likely recipient of Donald J. Trump’s endorsement.

Also not helpful for Greitens? His pending family court battle in Boone County, where he  accused Chestnut Greitens of “working with” Republican consultants from Washington, D.C., who had political vendettas against him. The insults and digs hurled at his ex-wife became vexing for the judge, who ordered Greitens to sit for a seven-hour deposition to discuss under oath the child and spousal abuse made against him. Last week, a Kansas City television station obtained a list of exhibits filed by Chestnut Greitens, including photographs taken and text messages after instances of abuse. The press coverage of Chestnut Greitens’ quest for sole custody, for better or for worse, undoubtedly had an impact on the outcome of the race.

But for someone fighting so hard for custody of his kids, Greitens sought to center himself and to portray himself as a “victim” of the establishment who still holds a “grudge” against him. That’s apparently an easier pill to swallow than “voters don’t want to elect a violent person,” and even Missouri’s millionaire/cartoon villain Rex Sinquefield, alarmed by the possible loss of a “safe” Republican Senate seat, contributed to the campaign against Greitens’ campaign.

Ultimately, Greitens received less than 19% of the vote. He didn’t just lose the “Battle of the ERICs” - he landed in a humiliating third place, behind U.S. Representative Vicky Hartzler, a candidate who was given the thumbs down treatment from Trump.

St. Louis voters made one clear, resounding declaration on Tuesday: political office is no longer a safe space for abusive and violent men. Voters do, in fact, care about the personal history and personal baggage that a candidate brings to the ballot because many voters, as well as their friends and families, have lived through the type of violence alleged against both Roberts and Greitens.

The EYE is greatly relieved that they will not have to write about these two vanquished candidates for a very long time.