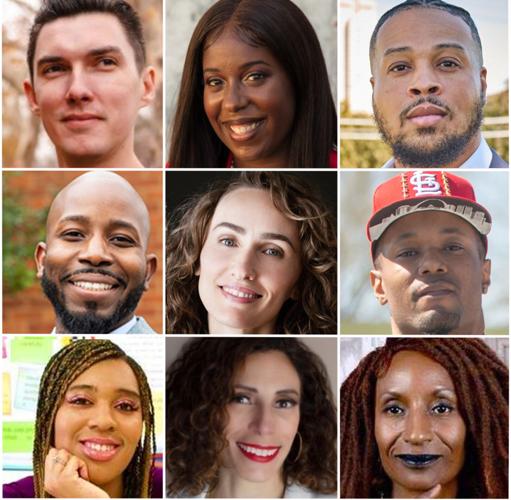 St. Louis Board of Elections filing officially closed last Friday, and we now know the final roster of challengers in “Aldergeddon,” a term that has been used to describe, not only the election required in every ward seat in the city, but also includes the added chaos created by radical ward reduction that forces several incumbent aldermen to face each other in March.

Board of Aldermen + Armageddon = Aldergeddon.

In addition to some heightened dramatics and theatrics in the coming months, one of the most powerful elected positions - Board of Aldermen President – has no contest. Apparently no one was brave enough (or had sufficient financial and political support) to step into the arena to challenge incumbent Board President Megan Green. Incumbent Alderman Shane Cohn will also enjoy a comfortable, non-competitive political spring. He was the only candidate to file for alderman of the new 3rd Ward.

For the 1st Ward, current Alderwoman and grassroots organizing powerhouse Anne Schweitzer will have two challengers: Matthew Kotraba and Tony Kirchner. Kotraba is an insurance agent and the Republican Committeeman for the old 13th Ward, and Kirchner, currently a city sheriff’s deputy. Schweitzer overwhemingly walloped her first opponent, then-incumbent Beth Murphy, and is a lethal campaigner with a winning record at both the local and state levels. Little is known about her new opponents, and things are likely to stay that way in the new 1st as Schweitzer is strongly favored to win.

In the 2nd Ward, which is primarily composed of the former 16th and 23rd wards, incumbent Alderman and Spy Plane enthusiast Tom Oldenburg faces Princeton Heights resident Katie Bellis and St. Louis Hillsian Phill Menendez. While Oldenburg has been spending campaign funds on building a Santa Claus out of sand (the “Sandta” of Candy Cane Lane) and trying to throw money at ineffective police technologies, Bellis has served on the Capital Committee’s Citizen Advisory Committee and volunteers as a patient escort for the Hope Clinic in Granite City, Ill. Menendez, a former SLMPD officer, doesn’t have much of a presence outside of the city’s barely existent Republican Party, so his platform is relatively unknown.

The 4th Ward is our first match-up of incumbents: current alders Joe “Car Wash Daddy” Vaccaro and Bret Narayan will duke it out with political newcomer Casey Otto, a freelance photographer from Clifton Heights. Vaccaro may have name recognition but we don’t know if that will be enough for him to overcome his own series of scandals, including a very transactional tax abatement for Mary Margaret Day Care and his cringe-worthy run in with an SLMPD officer last spring. Otto, the son of former state Representative Bill Otto, doesn’t have a campaign website set up, so we can’t say anything about his platform, yet. Narayan - the first Asian-American alderman in St. Louis - has prioritized public transparency, St. Louis Public Schools, and criminal legal system reform. We’re surprised former alderman Tom Bauer didn’t jump in for old time’s sake; thankfully, we’ve all been spared any likely second-hand embarrassment.

Vying to represent The Hill, North and Southampton, and Southwest Garden in the new 5th Ward are Alderman Joe Vollmer and small business owner Helen Petty. Not too long ago, Vollmer served as interim board president following the federal indictment and subsequent resignation of former president Lewis Reed, but The Hill-based “old school alderman” really prefers to be at the bocce ball garden and bar he owns. Petty runs a hair salon in the Grove neighborhood and her platform seems to politically align with Mayor Jones and Board President Green

In our first blast from the past, Jennifer Florida has decided that political retirement doesn’t suit her, so she has thrown her hat into the ring along with public relations professional Daniela Velazquez. The two women seek the aldermanic seat for the new 6th Ward, which includes the Shaw neighborhood, Tower Grove South, and a sliver of Dutchtown. Florida lost by 30+ points to then-Alderwoman Green, twice, while managing to find time to physically assault a family member along the way. Velazquez is a consultant currently working for FleishmanHillard, and she has the support of “Shaw Brawl” champion, incumbent Alderwoman Annie Rice, who decided to step down from elected office.

All three candidates in the new 7th Ward would be new to the Board of Aldermen. SLPS Board of Education member Alisha Sonnier will face Priory Catholic school staffer J.P. Mitchom and Lewis Reed’s own youth ambassador Cedric Redmon. Sonnier is the only candidate with political leadership experience, although Mitchom did serve as Tiffany Community Association president until 2019. However, Mitchom appears to have been voted out by community members upset by his support of the now-quashed QT project, for which he had declared neighborhood support, most likely without actually talking to the neighborhood first. Redmon’s ties to Reed are too close to consider his candidacy viable or anything other than an extension of the former board president. Sonnier’s résumé includes drafting the Saint Louis University Clock Tower Accords and helping to lead the SLPS school board to raise the district’s minimum wage and to expand gun violence prevention resources for families.

Shedrick Kelley tees up current, mostly absent, Alderwoman Cara Spencer and former alderman Ken Ortmann, for the new 8th Ward, which overlaps with Marine Villa, Peabody Darst Webbe, McKinley Heights, and LaSalle Park, as well as Soulard, Lafayette Square, and parts of downtown. Spencer has been absent since her 2021 loss to Mayor Tishaura O. Jones. But she has since taken sides against residents in favor of constructing a new charter school operated by Jack Krewson, son of former mayor Lyda Krewson. In a previous column, we detailed Spencer’s back room deal with Krewson and his charter school chain, Kairos Academy, that apparently was made without the knowledge or consent of Marine Villa residents. Since his ouster in 2017 by outgoing Alderman Dan Guenter, Ortmann has tried to take back his seat with no success. Regardless - both alderpersons will have an incredibly difficult time challenging Kelley, whose 122-vote loss to (also) outgoing Alderman Jack Coatar gives him an advantage for a significant portion of the new ward. Strongly connected to community, Kelley has already been knocking on doors for months and showing up for neighborhood meetings.

The New 9th Ward, which includes a large portion of Forest Park Southeast, The Grove business district, and the Central West End, will see a match-up between two incumbents - Alderpersons Tina Pihl and Michael Gras - and Michael Browning, who comes from the Forest Park Southeast Neighborhood Association and the city’s Young Democrats organization.  Pihl was a “Flip the Board” candidate in 2021, defeating establishment candidate Michelle Sherod by a mere 19 votes. Gras is also a relatively recent addition to the Board, first appointed in 2022 when former alderwoman Heather Navarro resigned, and later winning his seat outright last April. All three candidates have identified equitable development and public safety as campaign priorities.

Incumbent Alderwoman and small business owner Shameem Clark-Hubbard has only a single opponent for the 10th Ward seat - recent Shaw resident and previous aldermanic candidate Emmett Coleman. In a previous aldermanic race, Coleman was accused of harassing a Black woman while canvassing and has ties to former alderman Steve Conway. Clark-Hubbard, on the other hand, has introduced hugely important bills at the board, including the $500-per-month guaranteed basic income legislation that recently passed as well as sweeping Civilian Oversight Board reform. Clark-Hubbard’s leadership has been transformative on the Board since she was first elected in 2019.

Incumbent Alderwoman Laura Keys - who became the 21st Ward representative after former alderman John Collins Muhammad resigned - faces recent candidate, Carla "Coffee" Wright, in her bid to keep her leadership role in the 11th Ward. Keys lost to Collins Muhammad by 29 votes in 2017, and again in 2021 by a much wider margin. When the seat was vacated by Collins Muhammad in early 2022, Keys won by slightly less than 300 votes, which translated to a 25% margin over her next opponent. Wright won 355 votes in the new 11th Ward during the crowded senate primary last August, so she may have a reasonable chance at leading the Midtown, Jeff-Vander-Lou, and Grand Center neighborhoods this time.

The 12th Ward has the most crowded field by far, with five candidates. Incumbent Alderwoman Sharon Tyus - who was collecting signatures for a possible board president run but fell short, depending on who you talk to - will face previous opponent and committeewoman Yolanda Brown, Darron Collins-Bey, Walter Rush, and the candidate we’re most excited to see: Tashara Earl, the small business owner who currently serves as the Revitalization of Baden Association president and fights negligent property owners in her spare time. Not a lot is known about Collins-Bey or Rush, but if any of the four challengers is going to defeat Tyus, they will need to expand their name recognition and bolster their war chests - Tyus’ last MEC report showed more than $21,000 cash on hand but her campaign has debt of nearly $25,000.

Moveover, former “Fightin’ 15th” - the new 13th Ward is the only Aldergeddon race where all three candidates are current incumbents - Alderwomen Lisa Middlebrook (currently of Ward 2), Norma Walker (Ward 22), and Pamela Boyd (Ward 27). The favorite in this matchup is unclear and a fight is to be expected. Walker is relatively new to the Board of Aldermen, winning the most recent election last August to fill the vacant seat left by the abrupt exit of the former alderman, Jeffrey Boyd. Both Middlebrook and Boyd were members of the “Ladies for Lewis” caucus, the former group of Northside alderwomen who voted consistently with former president Reed.

Finally, the EYE will be watching closely the race in the 14th Ward, which includes two incumbents (Aldermen James Page and Brandon Bosley) and current State Representative Rasheen Aldridge. Hubbard family member and real estate agent Ebony Washington also plans to run. Bosley is known most recently for a possible hit-and-run-and-false-report during the Christmas snowstorm in his own 3rd Ward, while Page, unfortunately, demonstrated in his first term that he wasn’t too different politically from the former 5th Ward alderwoman, Tammika Hubbard, who Page ousted in August 2019. Aldridge, frustrated by Jefferson City politics, wants to come home to North St. Louis to represent the New North Riverfront and Hyde Park neighborhoods, as well as Carr Square and most of Downtown West. Although he lives in St. Charles County, notorious property speculator Paul McKee owns a vast amount of property in the ward, including hundreds of LRA lots and the facility that McKee disgracefully re-named an urgent care Homer G. Phillips Hospital. Bosley co-sponsored a performative resolution that never made it to the full Board; Page was nowhere to be seen on the issue despite the affront to many in the Black community. Only Aldridge was willing to stand alongside Jeff-Vander-Lou residents, community activists and hospital alumni to oppose the developer’s disrespectful, arrogant appropriation of the long-time (1939-79) hallowed health care and training full-service institution’s name. Both Page and Aldridge have defeated members of the once-powerful Hubbard family, who have long served McKee’s nefarious schemes in the past.