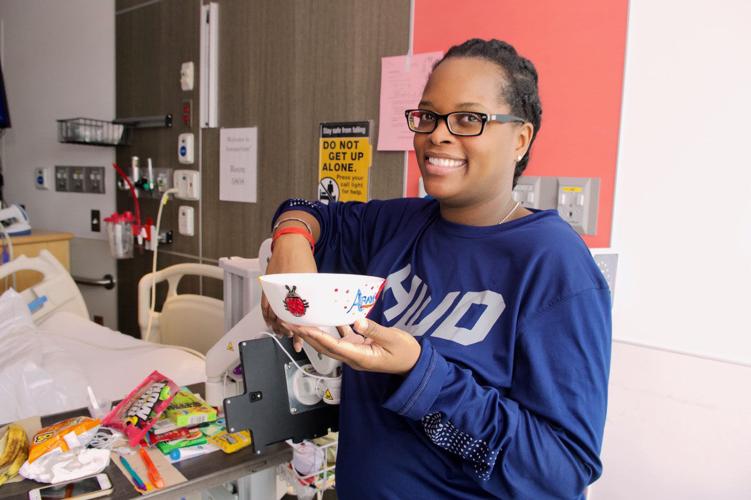 Poplar Bluff resident Angela Jackson painted a bowl that she will use to feed her baby after she arrives. A pregnancy complication is causing Jackson to stay at the Women and Infants Center at Barnes-Jewish Hospital in St. Louis through the duration of her pregnancy and delivery. 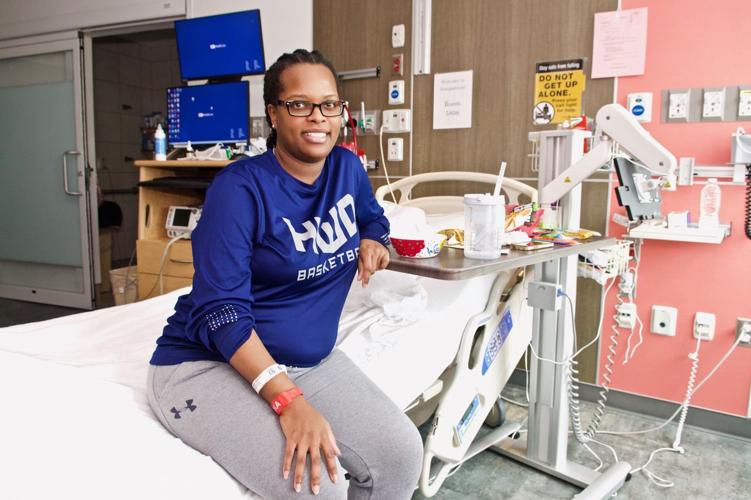 Angela Jackson has been taking childbirth, newborn care and breastfeeding classes for mothers during an extended stay on Barnes-Jewish Hospital’s Antepartum Unit.

Since February 23, expectant mother Angela Jackson’s home away from home has been on an upper floor of the Women and Infants Center at Barnes-Jewish Hospital in St. Louis. That was the day after her amniotic fluid started leaking.

At first, she didn’t know what caused the water gush. It was about 3 a.m., and she decided to go back to sleep. She was only about halfway through her pregnancy, and it was far too early for labor.

When she woke up and realized the leak continued, Jackson called her doctor, who had her go to her hospital in Poplar Bluff, Missouri. Although she could not feel them, Jackson was told she was having contractions. Jackson was at the hospital overnight before she was advised that she would be better off at Barnes-Jewish, where the hospital is better equipped to monitor her health and that of her unborn baby girl.

Barnes-Jewish was three hours away. She was flown by a hospital transport team to the Women and Infant’s Center, where she will stay until after her baby is born.

“Our Antepartum Unit is for moms who are hospitalized during their pregnancy, either because they have something medical going on and they are pregnant that requires us to watch both mom and baby, or there is something going on specifically with their pregnancy,” said Nicole Arciniega, Women’s Health Education and Outreach coordinator at Barnes-Jewish Hospital.

“For some of these moms, they are spending a few months with us, which isn’t very fun, so we try our best to make it as non-traumatic as possible.”

Although the hospital has the latest in technology to comfortably care for Jackson and other women who have long-term stays in the Antepartum Unit, the confinement can close in on anyone, particularly if they are far away from home. Also, the pre-baby preparation that takes place before the new baby arrives can be delayed or not happen at all when a mom-to-be is stuck in the hospital.

Arciniega teaches childbirth, newborn care and breastfeeding classes for mothers on the Antepartum Unit so they can prepare for the new baby even though a health crisis caused an extended hospitalization.

“We talk through what to expect,” Arciniega said.

“She’s very helpful and has been helping me since I’ve been here,” Jackson said. “The childbirth class that we had a couple of weeks ago – I learned a lot in there because I’m a first-time mom. I heard today there’s going to be a breastfeeding class, so I’m going to try to do that because I have about four weeks left.”

On Thursday afternoons, in a sun-bathed space on the unit that overlooks Forest Park, the hospital’s Arts and Health Coordinator Sarah Colby teaches baby-centric arts and crafts to antepartum patients. It gives the women something different to do for a few hours and breaks up the isolation from one another. Colby said the idea started several years ago and was suggested by the Women and Infants chaplain.

“A hospital arts program works best when there are people together,” Colby said. “It’s really about celebrating the best part of your humanness when you are sitting and making and chatting. It’s become a thing now.”

During a previous craft day, Jackson painted a bowl using bright colors to create flowers and a lady bug adorn the bowl that her child will use one day.

Something to look forward to as she, like most moms do in their last trimester, counts down the weeks and days until her delivery.

“It’s been okay,” Jackson said about her stay.

One thing that could make things better than okay, she said, would be if food that she orders electronically would arrive as ordered and at its estimated time.