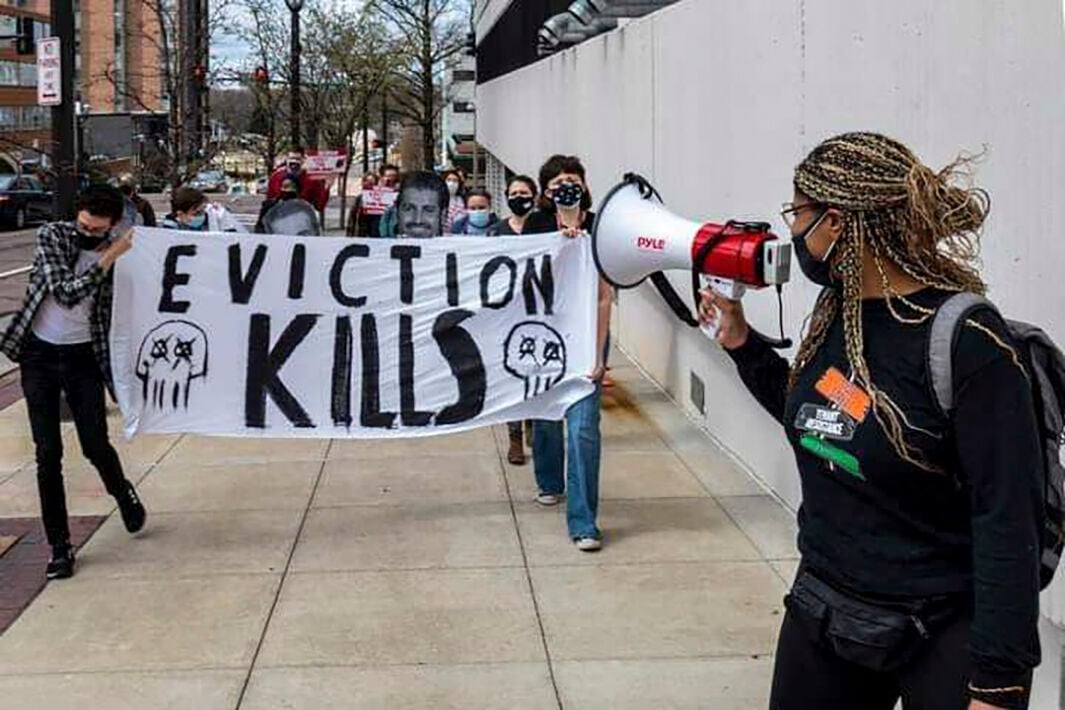 Members of the STL Housing Defense Collective gathered downtown on Monday Aug. 2, 2021 to demand better rental assistance. Thousands in the St. Louis area face the threat of eviction as a federal moratorium expired. 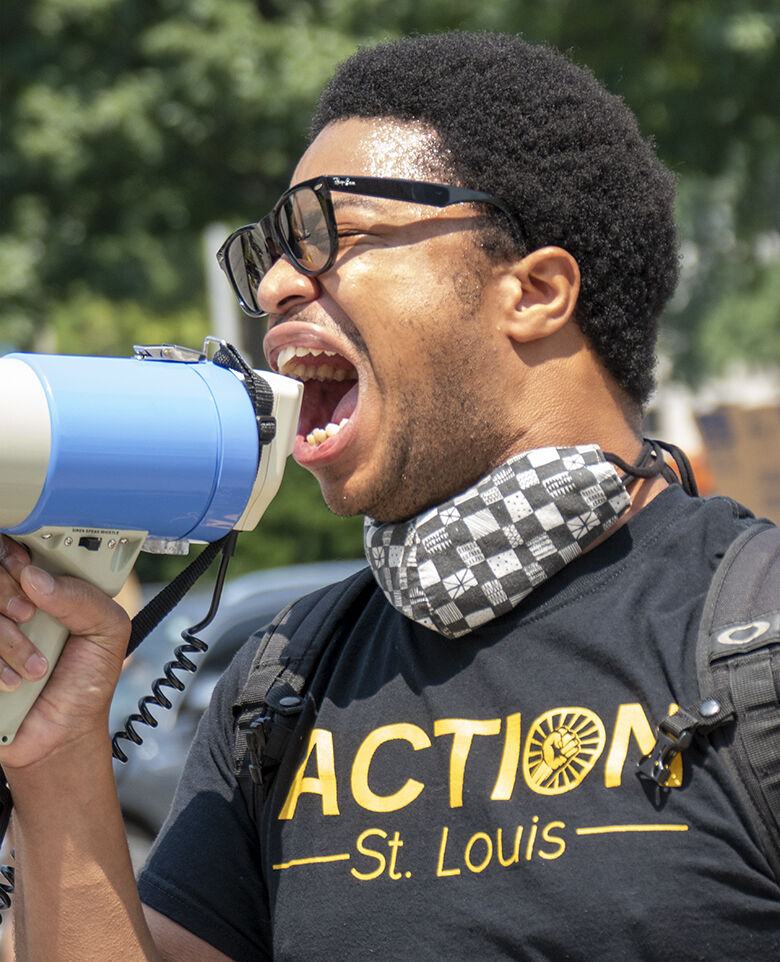 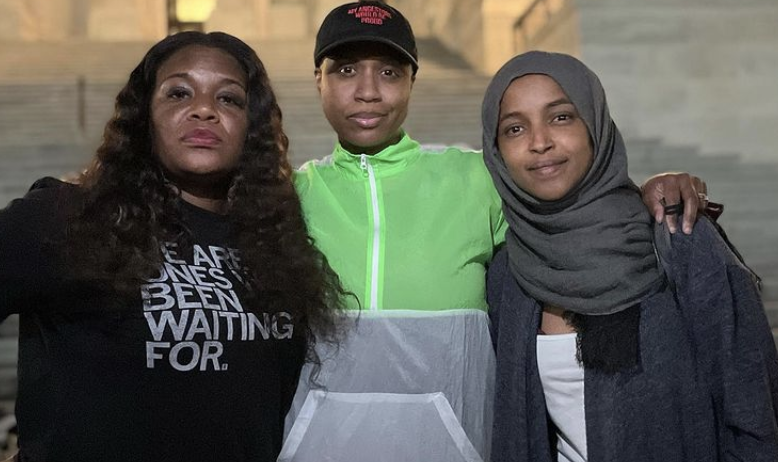 Rep. Ayanna Pressley (D-Massachusetts) (middle) and Rep. Ilhan Omar (D-Minnesota) (right), on the U.S. Capitol steps with Rep. Cori Bush (D-Missouri) on Sat., July 31, stand in solidarity with Bush, who introduced a national resolution for “ending the unhoused crisis by 2025." Bush started camping out on the Capitol steps with other activists calling for action from the U.S. Congress to extend the eviction moratorium on Thurs., July 29, 2021.

Nearly 100 residents of St. Louis County face eviction by next week, a spokeswoman for the county courts said, and housing advocates were bracing for a wave of evictions as a national moratorium was allowed to expire over the weekend.

Calling it a “precipice moment,” one attorney wants to see sheriff’s authorities “slow down” and let rental assistance funds already allocated by the federal government find their way into local hands.

“We’re definitely getting calls,” said Lee Camp, a senior staff attorney with ArchCity Defenders. “All weekend my phone was ringing.

“I didn't necessarily expect when Monday [August] second got here that it would feel this overwhelming. But there is a very, you know, just heavy feeling of concern around our office today.” -- Lee Camp, senior staff attorney, ArchCity Defenders

“We all knew that this moratorium was... very likely coming to an end at the end of July,” he said. “And for some reason, maybe I was naive, maybe I was holding out some optimism, but I didn't necessarily expect when Monday [August] second got here that it would feel this overwhelming, But there is a very, you know, just heavy feeling of concern around our office today.”

Across the nation, housing advocates were scrambling to forestall potentially thousands of evictions that are expected to fall most heavily on women and people of color.

The moratorium, which stopped actual displacements but did not block landlords from filing court paperwork that begins the process, was imposed last year by the U.S. Centers for Disease Control and Prevention to keep thousands of financially strapped renters from swarming homeless shelters in the middle of a global pandemic.

Before the moratorium expired, Household Pulse data from the U.S. Census Bureau estimated that about 73% of renters most likely to be evicted were people of color. About 56% of the most vulnerable renters were women.

Estimates of the number of the renters who could be impacted by the moratorium’s lapse vary, from as low as 11 million forecast by the Center on Budget and Policy Priorities to up to 23 million renters, based on estimates last year from the Aspen Institute.

U.S. Rep Cori Bush, MO-01, who penned an article over the weekend about living in her car with her two small children, spent last week campaigning for an extension of the moratorium.

On July 28, she introduced the Unhoused Bill of Rights, legislation designed to provide unprecedented levels of aid to unhoused populations across the U.S.

Two days later she joined activists sleeping outside the White House in protest.

“We are now in an eviction emergency,” Bush said. “Allowing the federal eviction moratorium to expire was a moral failure, but we came together last night to demonstrate that our movement is strong and our work is not finished...I’m calling on every single one of my colleagues to come back to Washington, D.C. and use our power to take care of each and every one of our neighbors.”

In a City Hall meeting with St. Louis Mayor Tishaura Jones, protesters demanded better rental assistance, more mediation in eviction proceedings, and an end to sweeps of unhoused encampments in the city.

While Missouri did not enact a statewide eviction moratorium last year, St. Louis County, St. Louis, and Jackson County each issued their own. Those measures have now expired, along with the CDC directive.

At a news conference Tuesday at Horizon Housing, a nonprofit that provides housing services to homeless individuals with developmental and mental disabilities, Jones said the city would work to open more walk-in clinics to help renters with the necessary paperwork.

She said the city has about $17 million in funds available from earlier federal stimulus programs, adding that the average grant is about $3,000.

Meanwhile, Bush, House Speaker Nancy Pelosi and House Democratic leaders continued to press the Biden administration to extend the moratorium yet again, according to the Associated Press, calling it a “moral imperative” to prevent Americans from being put out of their homes during a COVID-19 surge triggered largely by the highly contagious Delta variant.

After the U.S. Supreme Court declined to step in and save the measure, the Biden administration said it would let the ban expire.

Christine Bertelson, a spokesperson for the circuit courts in St. Louis County said 99 evictions were scheduled for this week [week of Aug. 2] along with Monday and Tuesday of the next week.

She said the county has been carrying out evictions since April, unless tenants had a signed copy of the CDC’s “declaration under penalty of perjury” calling for a “temporary halt in evictions to prevent further spread of COVID-19.”

Sheriff’s office spokespeople in Jefferson and St. Charles counties could not immediately be reached for comment.

Camp, of ArchCity Defenders, complained that some renters facing eviction filed the proper paperwork to receive federal rental assistance but have yet to receive aid that would be used to pay back the missing rent.

“As of late, we've heard a ton of concerns about rental assistance, and families that say ‘we've applied for this money that is on the table, but we're not hearing anything back.’” Camp said.  “And that's incredibly perplexing for a family that is already navigating the crisis of potentially losing their home, … when you’re not even hearing back on the status of an application.”

Housing assistance was one of the key components of an $80 million spending plan submitted by Jones using funds from President Biden’s American Rescue Plan. That measure, amended by the Board of Alderman and increased to nearly $170 million, remains in limbo as Jones, the City Counselor and compliance auditor maintain that aspects of the amended plan run afoul of US Treasury regulations dictating how the funds can be spent. President Lewis Reed, who lost the mayoral election that Jones won this spring, denies that assertion.

See an updated version of this story here.