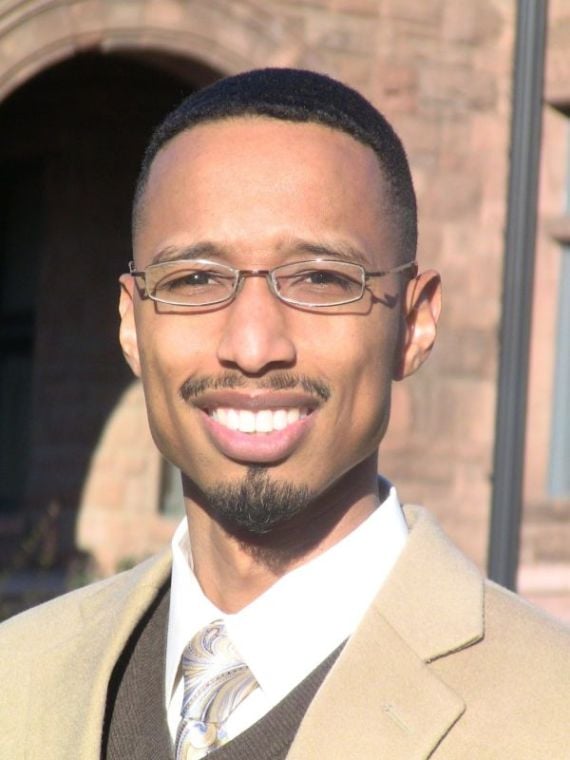 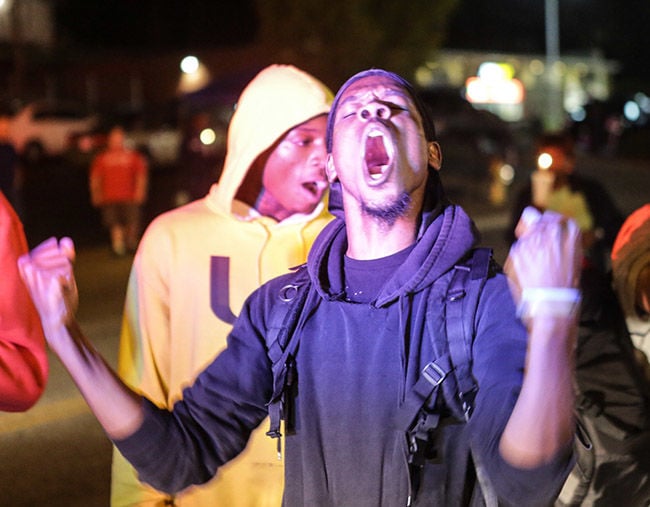 Stefan Bradley asks: “What happens when those black college men stop smiling, identify with one of their peers who was shot dead and laid in the street for four and a half hours, and start protesting?” (Ferguson file photo from September 2014.)

Part of a year-long series, presented by The American and the Brown School at Washington University,  on changing the narratives and outcomes of young black males in St. Louis.

“How’s the team going to be this year?” was one of the first questions I heard as I began my college career at a private predominantly white institution (PWI). To be fair, I am relatively tall, so I accommodated the query of the friendly white student. I said that the team would be great and that we had a lot of men who could drive well and put it in the hole.

When the curious student said, “See you on the court,” I corrected him, saying, “You mean you’ll see me on the course, right?” I explained that I assumed he was wondering how the golf team was going to be this year.

Life for black males seeking education at PWIs can be extremely enriching yet equally precarious. It requires moderation and measurement regarding their ability to express themselves and maintain their dignity. Those brave souls who venture into mostly white educational spaces searching to attain the benefits of a degree and American achievement cannot leave without scars.

While writing my newest book, “Upending the Ivory Tower:  Civil Rights, Black Power, and the Ivy League,” I found that education at PWIs has required sacrifice from all but particularly from black men. W.E.B. Du Bois, Harvard University’s first black recipient of a doctorate, described his relationship to his PWI. He said he was “in Harvard but not of it.”

Black men were granted access to white spaces, so they were technically “in” those elite educational centers. However, black men were clearly not “of” the universities because of their blackness and the cultures of institutional white supremacy that existed. They faced double marginalization: They were neglected and suppressed in their traditionally white schools but also marginalized in their black communities.

The minority of black men who could attend these esteemed institutions were privileged among their peers in their de facto and de jure segregated neighborhoods. As former U.S. Attorney General Eric Holder explained, he felt obligated to prove that he was still “one of those guys” from his Queens, New York neighborhood when attending Columbia University.  Holder, Du Bois, and the countless other black men who have endured life at PWIs, understood that they were living what Holder called a “dual existence.”

In recent years, nothing better highlighted that dual existence for black college men at PWIs in the St. Louis metropolitan area than the protests following the police killing of Michael Brown in Ferguson.

It is no secret that in traditionally white private universities, like those in St. Louis, black men are scarce. There are, of course, systemic and social reasons for that. We know them well: racial segregation, lack of economic investment in black neighborhoods and public schools, inadequate training for things like standardized tests, the prison industrial complex, etc. On campus, black men are reminded of their blackness when security officers constantly ask them to produce identification or when they are asked if they are on scholarship or beneficiaries of affirmative action.

For the record, I proudly attended PWIs on scholarship (not basketball or golf) and with the assistance of affirmative action. When I was young I felt as though I had to defend my existence, but after closely studying the history of this nation, I realized it was not me who should have harbored the shame. I proudly strut through the hallowed halls of these institutions, with the knowledge that black people built America and that affirmative action was historically white (and in many ways it still is).

Over the past century, I have studied or worked at six different PWIs. In these spaces, I have observed the way that black professional men survive.

I have found that their careers are mostly safe if they frequently express gratitude (whether sincere or not) to the institution, generally go along with whatever their colleagues want, out-produce their peers but do not conspicuously outshine them, avoid all suspicions of impropriety with female students (particularly nonblack students), do not drive better cars than their supervisors, do not ever raise their voice or move too quickly around women and supervisors (for any other reason than school pride), question their institution’s sincerity with regard to “diversity” without first reassuring all the “allies” that they are doing their very best, and never – ever – forget to smile.

I have watched some black men (including this black man) suffer the consequences of violating those unwritten rules, and I have also witnessed other black men lose parts of their souls to fulfill the compromise. As the rapper Nasir Jones explained: “Inclusion is a hell of a drug.”

At every level of education, black men are few. In elementary schools, black men are extremely underrepresented on the faculties, but black boys are statistically overrepresented regarding suspensions, expulsions, and other disciplinary actions in St. Louis area. At the collegiate level, black men are among the least retained student demographic and make up a very small minority of the faculty and administration. National black male college completion rates hover around 35 percent.

There are three primary reasons they do not finish: lack of financial support, unpreparedness for collegiate level work, and difficulty enduring the cultural transition. Knowing these facts, black men in universities could make good use of assistance and accommodations like more encompassing financial aid packages geared toward retention, transition programs, and well-funded black male initiatives. There should be no shame and consensus among officials along these lines but, alas, extending such help becomes problematic at institutional levels.

I have been a part of black male initiatives at three different universities and learned a few things. People love images of well-dressed young black men smiling. When well-resourced and guided, the initiatives really work in helping to retain black men. I learned everyone (especially those who are not black males) seems to know what is best for black males. Lastly but not at all the least, officials, “allies,” and opponents alike grow deeply concerned when young black men stop smiling.

What happens when those black college men stop smiling, identify with one of their peers who was shot dead and laid in the street for four and a half hours, and start protesting? What is the university reaction when black male students decide they will protect themselves from racist taunts and threats?

The cold truth is that even if black men and women are as well educated as their white peers, they will likely not make as much money and garner as much wealth. That is the cruel black tax. It does not, however, mean that we as Americans should not try to manifest justice and equity. There are ways that the region can help improve the life chances of black males.

First, commit to funding primary and secondary public education equitably, keeping in mind students need the wrap-around services that Rev. Starsky Wilson discusses. This means the corporations that receive generous tax breaks must invest in the wellbeing of school children in the region.

Next, the companies and executives that found money for job training programs after the Ferguson uprisings must take the lead in privately or publicly funding initiatives and scholarships to place collegiate black men in the teacher preparation pipeline (at PWIs and at Harris Stowe State University) while also incentivizing careers in their companies.

Additionally, the Fortune 500 companies in the region should offer paid internships to young men mentored by organizations such as black Greek-Letter fraternities and sororities, the 100 Black Men, the Urban League, Better Family Life, and the collegiate black male initiatives associated with Home Grown.

Then, the policing model must change if the region ever stands a chance of thriving. Too much effort and money are spent on petty violations and enforcing insignificant laws when there is real work to be done to prevent and solve major crimes. Hint: body cameras and more officers will not solve the problems the region is confronting. I predict the relationship between black males (of all educational levels) and the police will be a harbinger of the region’s health.

By most measurements, I made good by achieving educationally and working at PWIs. It, however, has come at a cost. I never quite felt like I completely fit in or that I could be my whole self at the universities at which I studied and worked. That is why I devote nearly all my energy to creating opportunities for black youth to enjoy and take advantage of their educational experiences.

So, too, do those associated with HomeGrown STL. Perhaps these efforts will help to create a city and region where young black men will want to share their talents.

Stefan M. Bradley is chair of the Department of African American Studies at Loyola Marymount University and author of “Upending the Ivory Tower:  Civil Rights, Black Power, and the Ivy League.”

“Homegrown Black Males” is a partnership between HomeGrown STL at the Brown School of Social Work at Washington University in St. Louis and The St. Louis American, edited by Sean Joe, Benjamin E. Youngdahl Professor and associate dean at the Brown School, and Chris King, managing editor of The American, in memory of Michael Brown.