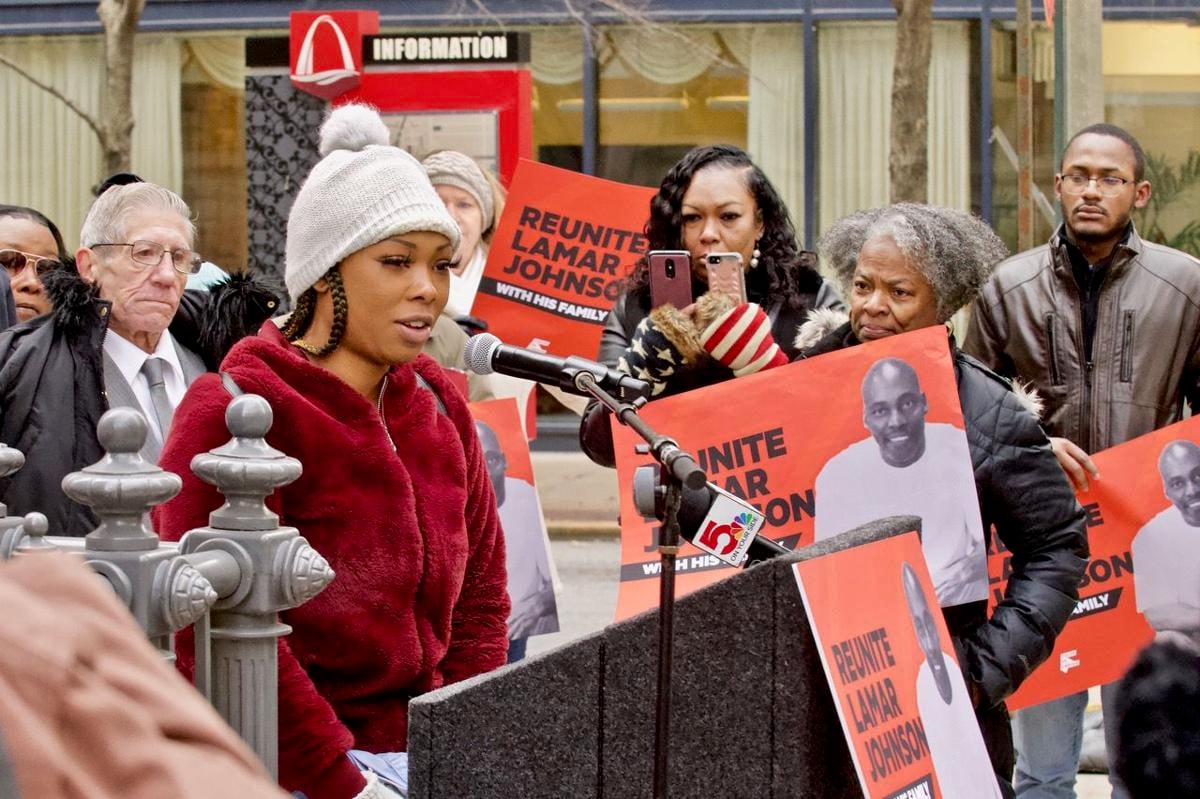 Brittany Johnson spoke in support of the release of her father Lamar Johnson who was wrongfully convicted in the 1995 murder of Marcus Boyd. Johnson was sentenced to life in prison without the possibility of parole. A petition was delivered to Missouri Attorney General Eric Schmitt to end his efforts to block a new trial and release of Lamar Johnson Tuesday December 10, 2019. 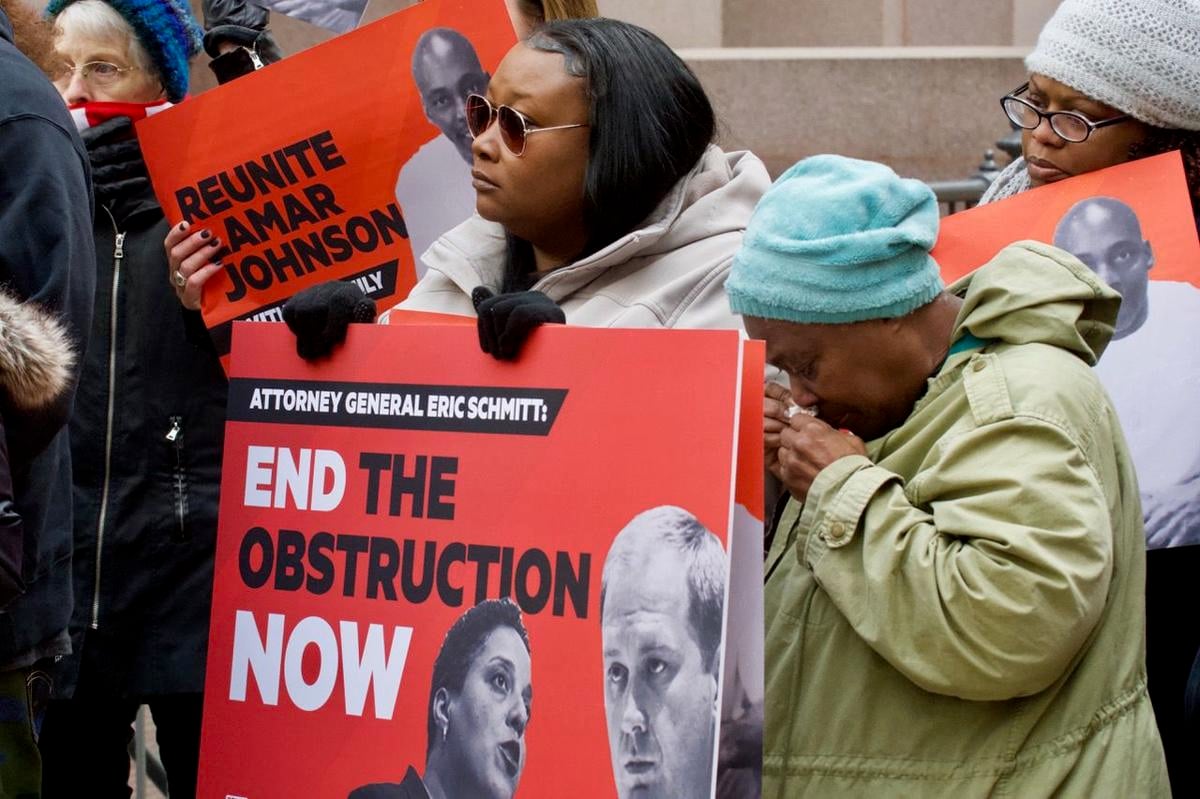 Lamar Johnson's sister Candace Crisp and his mother Mae Johnson braved the cold to bring attention to Johnson's case on Tuesday, December 10 in front of the Old Post Office downtown. A group of about 25 community leaders and residents, organized by Color Of Change and Organization for Black Struggle, demonstrated outside of Missouri Attorney General Eric Schmitt’s office to demand that he stop trying to block a new trial for Lamar Johnson.

Brittany Johnson wants her father to come home after spending almost 25 years in prison for a murder than St. Louis Circuit Attorney Kimberly Gardner argues he did not commit.

“He’s never abandoned me,” Johnson said. “After so many years growing up without your father, and then you have all these people who are standing up behind him, it just seems like everything is coming to the light. And there’s no turning back.”

Brittany Johnson gathered with about 25 community leaders and residents outside of Missouri Attorney General Eric Schmitt’s office on Tuesday, December 10 to demand that he stop trying to block a new trial for her father, Lamar Johnson.

Twenty-four years ago, Lamar Johnson was convicted of murdering Marcus Boyd on October 30, 1994, though evidence shows that Johnson was at a friend’s house and would not have been able to commit the crime. He was sentenced to life in prison without the possibility of parole.

Prosecutors filed a 67-page motion that attempts to prove Johnson’s innocence and grant him a new trial. It also provides evidence that the homicide detective allegedly made up witness testimonies, which the witnesses only learned about years later. It also provides documentation that an assistant circuit attorney paid off the only eyewitness and cleared some of his outstanding tickets.

This is the first exoneration case Gardner’s new Conviction Integrity Unit has brought forth — and the first that any prosecutor in the City of St. Louis or St. Louis County has presented to the court.

In response, the circuit judge asked Schmitt to get involved, and Schmitt said in an Aug. 16 motion that Gardner doesn’t have the authority to ask the 22nd Circuit Court for a new trial.

“And now, while Kim Gardner is actively working to restore accountability in the justice system,” said Marybeth Onyenkwu, senior campaign manager at Color Of Change, “the  attorney general is defending and supporting a status quo that would rather see an innocent man behind bars than a fair new trial.”

On December 10, Brittany Johnson and a coalition of supporting organizations brought Schmitt a petition of 25,000 signatures supporting Lamar Johnson’s release. Jamala Rogers, executive director of the Organization for Black Struggle, said that this is an example of tax dollars being used to house and convict people wrongfully.

“We are not standing here saying that everybody is innocent, but there are far too many people who have been convicted because of overzealous prosecutors who have no regard for truth or facts,” Rogers said. “That has to stop.”

When the coalition members tried to bring the signatures into the Old Post Office building, a group of about 10 St. Louis city police officers were standing inside blocking the door. They allowed a few coalition members to drop off the petition, but the officers refused to allow the press to enter the building at the direction of the property manager, the DESCO Group.

Later Schmitt’s press secretary said in an email to the American that his communication team was in Jefferson City and that “we were not comfortable having members of the press present in our office without a member of our communications team present.”

According to the Old Post Office’s website, the Missouri Development Finance Board leases the building to DESCO, and its tenants include several government agencies.

At the press conference, two exonerees who met Lamar Johnson in prison spoke about the impact of spending more than two decades in jail for a crime they didn’t commit.

“I will never forget the promise Lamar Johnson and I made to each other: whoever makes it out first, that person will come back for the other,” said Ricky Kidd, who was exonerated this August after spending 23 years in prison. “I know what it is like to languish within the confines of a place that was built for the guilty despite being innocent. I know what it’s like to have cold meals in cold cells, watching the state attorney general relentlessly fight to keep you locked up.”

The coalition spoke repeatedly about the need to support Gardner and her conviction integrity unit.

“We have to rally behind Kim Gardner, a prosecutor who understands the JUST in justice,” Kidd said. “We can’t fail such a critical test at a time where history will record how we respond.”