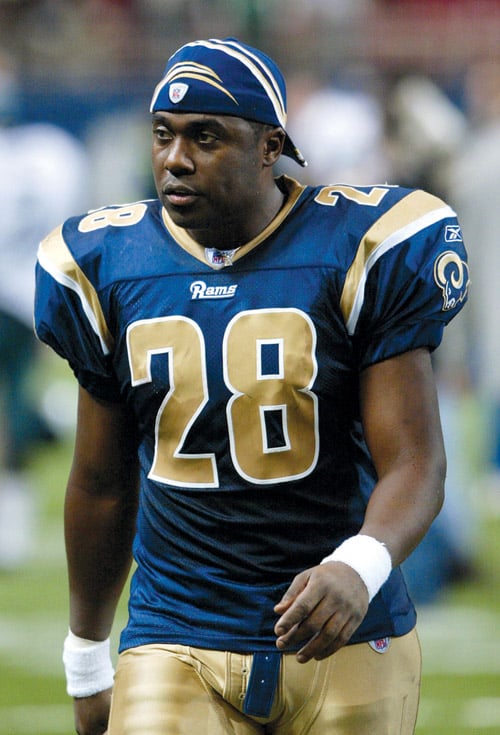 This Saturday, St. Louis' Marshall Faulk will be inducted into the Pro Football Hall of Fame 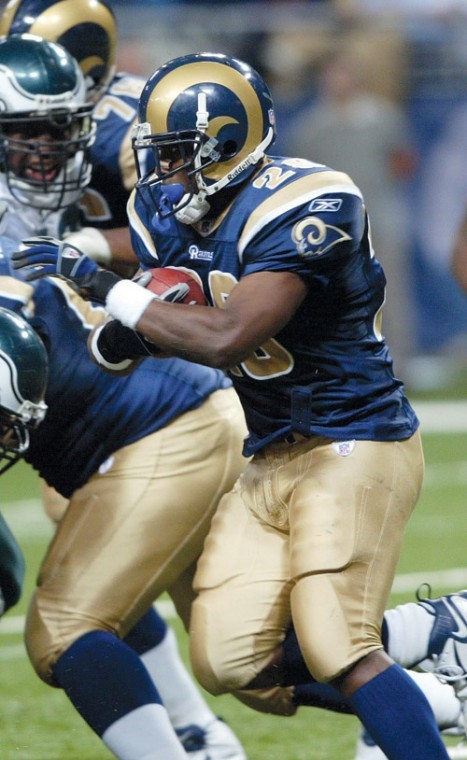 St. Louis Rams Marshall Faulk rushes for short yardage against the Philadelphia Eagles in the fourth quarter at the Edward Jones Dome in St. Louis on December 18, 2005. Faulk, who had 87 yards on the day, moved into the ninth spot for all-time rushing in the NFL. (UPI Photo/Bill Greenblatt)

This Saturday, St. Louis' Marshall Faulk will be inducted into the Pro Football Hall of Fame

St. Louis Rams Marshall Faulk rushes for short yardage against the Philadelphia Eagles in the fourth quarter at the Edward Jones Dome in St. Louis on December 18, 2005. Faulk, who had 87 yards on the day, moved into the ninth spot for all-time rushing in the NFL. (UPI Photo/Bill Greenblatt)

One of the most elite fraternities in the world has made a call, and one of our own has answered.

This Saturday, the Pro Football Hall of Fame will induct its newest members into its hallowed shrine. This year, St. Louis' Marshall Faulk will be part of one of the greatest classes inducted in recent memory, entering along with Richard Dent, Shannon Sharpe, Chris Hanburger, Les Richter, Ed Sabol and Deion Sanders.

For Faulk, his journey was not easy.

Born and raised in one of the tougher parts of New Orleans, Faulk found sports to his liking from day one. Football stood out for him at an early age. He eventually became one of the most sought-after high school seniors in the country.

During the recruiting process, Faulk quickly learned that most schools wanted him to do it their way, as many had the grandiose idea of converting him from running back to anything but that. Bad idea, as Faulk was going to play by one set of rules, his.

Enter San Diego State, a school where some did not even know they played football, and the one school that assured Faulk he could do anything he wanted on the football field. After Faulk's freshman year, the whole country knew that San Diego State had two things: a football team and Marshall Faulk.

He ran all over the University of Pacific in just his second collegiate game on September 15, 1991. In 37 carries, he racked up 386 yards and scored seven touchdowns, both records for freshmen (the 386 yards were then an NCAA record).

That performance sparked one of the greatest freshman seasons in NCAA history. Faulk gained 1,429 yards rushing, with 23 total touchdowns (21 rushing), and 140 points scored. Although in the next two seasons he would not replicate the success of his freshman year, he showed in his final season he was still an all-purpose back, catching 47 passes for 640 yards, ranking 3rd in all-purpose yardage and 2nd in scoring.

Faulk left San Diego State University with many of the school's offensive records, amongst them 62 career touchdowns, which is the 8th most in NCAA history. Faulk only stayed at San Diego State for three years, ironically never winning he Heisman Trophy. One year he finished behind a guy named Gino Torreta.

Drafted second overall in 1994, Faulk helped put the Indianapolis Colts back on the map. Faulk won the Rookie of the Year Award and just kept getting better. His run with the Colts came to an end over a contract dispute.

The trade that saw Faulk land in St. Louis was the ultimate difference-maker for Faulk and St. Louis. Faulk was the key to the Rams' glory days, back-to-back Super Bowl appearances and eventual Super Bowl win. He captured an MVP award and became the second player after the great Roger Craig to rush and receive for 1,000 yards in one season.

Marshall Faulk is the best athlete ever to play pro football in St. Louis.

There is an "X" factor about Faulk. While his exterior physical composition may not compare to some of the sculpted athletes who were assigned to slow Faulk down, Faulk's mind and heart are cut like the body of any highly tuned and chiseled athlete. He saw things downfield while they were taking place which mere mortals saw only after the fact on film. No one had a better feel about players and who could really play than Marshall Faulk.

If you are an NFL owner and you want to win, give Faulk the keys to hire the right people and make your Super Bowl reservations for four or five years later. In the meantime, tune in any Sunday on the NFL Network and see why he is one of the top studio analysts.

The other factor that makes Faulk a Hall of Famer is toughness. He had no problem being the last man standing. A player who seldom lost his cool on the field, Faulk led by example. His emotional displays were calculated and well-timed for full effect.

As for Marshall Faulk the person, he is like the planet Saturn, a man with many rings of friends and associates that surround him. Each ring has a significance, as those who try to get closer never really know where they stand. They only know to be thankful for him.

While normally cool and collected, the one thing Marshall Faulk will always display is passion. I could tell you about his passion for golf, but I think a single-digit handicap would tell you all you need to know.