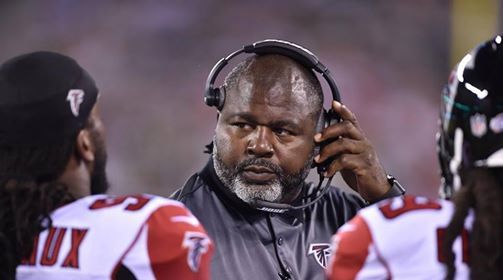 Former East St. Louis Flyer Bryan Keith Cox is one game away from making another trip to the Super Bowl as the defensive line coach of the Atlanta Falcons.

Former East St. Louis Flyer Bryan Keith Cox is one game away from making another trip to the Super Bowl as the defensive line coach of the Atlanta Falcons.

Cox earned a ring with the New England Patriots in Super Bowl XXXVI against the St. Louis Rams. He is one game away from making another trip to the big game as the defensive line coach of the Atlanta Falcons.

Known for his toughness on the football, Cox recorded 938 tackles and an impressive 51.5 sacks with four interceptions, and a touchdown to his professional resume.

Cox played his collegiate football for the Western Illinois Leathernecks (1987-90) in Macomb, earning his degree in mass communications. During his collegiate career, Cox admitted adjusting to college life wasn’t easy, and considered leaving college to join the military.

“I wanted to graduate from college, but there were many times that I wanted to go home,” Cox told me in an interview last year.

Cox called his mother at that time. He quickly found out that quitting wasn’t an option after his mother made the 2 ½ hour trip to Macomb to prove her point.

“She just simply told me that I wasn’t quitting anything that I started, and that was then end of that,” he said.

Cox will be leading a much improved Falcons defense that will be without St. Louisan Adrian Clayborn in the NFC Championship game this week against Green Bay. The former Webster Groves standout  was injured on the third defensive snap against Seattle in the Divisional round.

Clayborn, who missed three games due to a knee injury during the regular season, still was having good year recording 4 ½ sacks and 8tackles for lost yardage. Clayborn has performed well under Cox this season. His all-around play only 13 games with 22 tackles, 14 quarterback hits and one fumble recovery for a touchdown.

Cox also coaches an impressive group that includes Dwight Freeney, Courtney Upshaw, Brooks Reed, Tyson Jackson, and outside linebacker Vince Beasley Jr. who often plays like an end and is having a Pro Bowl season leading the NFL in sacks. They all give Cox credit for their improved and aggressive play this season.

Cox, who is two wins away from another Super Bowl ring will have a huge fan club back home in East St. Louis rooting for him in the NFC Championship game.

In addition, talk in the barbershops, local eateries, and watering holes in East Boogie are hoping the former Flyer great Bryan Cox has his defensive-line ready on Sunday against the gun slinging Aaron Rodgers and the Green Bay Packers’ offense.

Win or lose, when Cox returns home and talks to the youth in East St. Louis, he is still recognized as a hero, and one of the greatest players in Flyers history.

In addition, he’s considered a person who has never forgotten where it all started East St. Louis, Illinois.

The 2017 McDonalds All-American team was announced this week. With Chicago Illinois hosting this year’s event the #1 and the #2 rated recruits in the state East St. Louis Jeremiah Tillman (Illinois) nor Belleville Althoff Jordan Goodwin (SLU) received invitations. Something seems terribly wrong here. Tillman rated one of the top 25 players in the country not receiving an invite is ridiculous. Since 1977, the state has had a representative in the game every year but 2016, 2012, and 1977. Wonder if this is a reflection on the University of Illinois basketball program lack of recent success and its relationship in Chicago?

The University of Missouri is sending Assistant Director of Athletics Howard Richards parading around local media talk shows regarding the state of its athletic programs.

Howard is a great guy who is doing his job. However, it’s not going to help good old Mizzou with recruiting in this area.

The black community in particular has seen this song and dance before in Columbia. And it certainly won’t help the strained relationship with the football program at East St. Louis.

East St. Louis Flyers quarterback Reyoundus Estes will be making a visit to the University of Minnesota this weekend. He previously gave Mizzou a verbal commitment.

All- American wide receiver Jeff Thomas has officially taken Mizzou and Illinois off his list of choices. A wildcard team is the leading candidate to land the Under Armour All American MVP. You can bet that the St. Louis American will be the first to inform you of his decision close to the February 1 signing day.