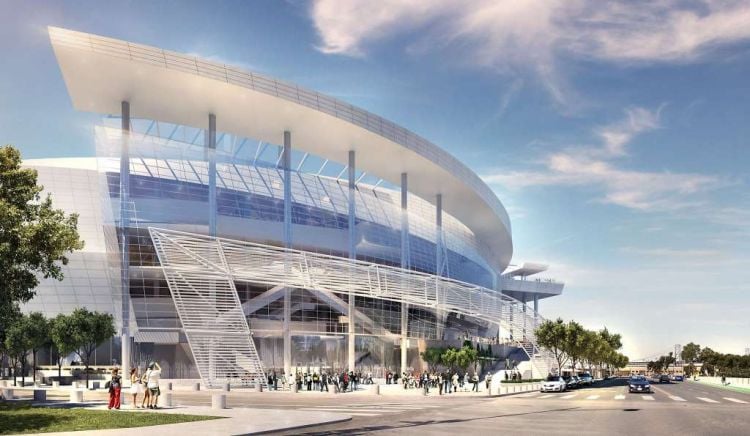 The Golden State Warriors are set to break ground on a new billion dollar stadium this month. The Case Center is a rare example of a completely privately-funded professional sports arena in the nation. 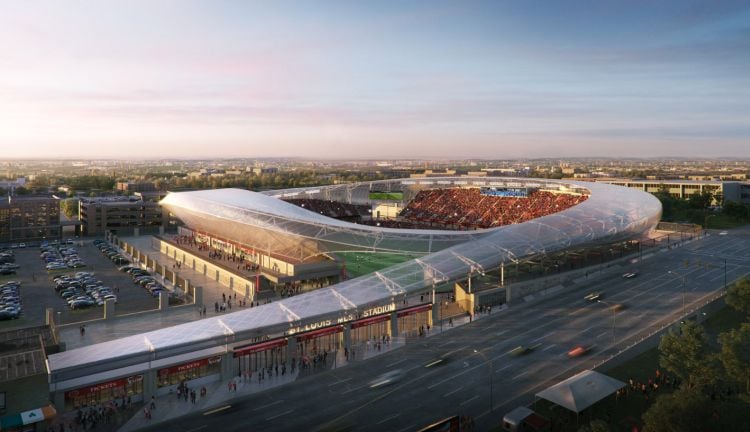 Plans for a proposed MLS soccer stadium in downtown St. Louis may be in jeopardy after Gov.-elect Eric Greitens stated his opposition to publicly-funded professional sports stadiums.

The Golden State Warriors are set to break ground on a new billion dollar stadium this month. The Case Center is a rare example of a completely privately-funded professional sports arena in the nation.

Plans for a proposed MLS soccer stadium in downtown St. Louis may be in jeopardy after Gov.-elect Eric Greitens stated his opposition to publicly-funded professional sports stadiums.

It has been nearly one year since the Rams departed downtown St. Louis for the bright lights and big stars of Los Angeles. In retrospect, the move turned out to be a blessing for the city. While losing a professional sports team was disappointing for sports fans in the region, the move saved the city from the burden of publicly financing another expensive sports stadium. (It also spared us from watching another year of brutally bad football, but that’s another column.) It also continued a small, but growing trend for billionaire owners of sports teams to bypass public funding and choosing to raise private funds their new, shiny stadiums. It’s a trend that cities across the nation are desperately hoping will continue.

For decades professional sports teams have run the long con on cities by extoling the virtues of publicly financed stadiums. They have touted the jobs that will be created and taxes that will be raised. Tall tales of boosted tourism and city validation float around every time a sports franchise contemplates entering a new market or when a newer stadium in the current city is required desired. However, most studies done by unbiased economists show that there is virtually no regional economic gain of publicly funded stadiums.

Still, cities continue to open the coffers for high rollers simply because that’s the way it has been done for years. It reminds me of the game all of us have played with the cable/satellite services at some point. When prices get too high, we call and threaten to leave and take our entertainment dollars elsewhere. A retention rep pleads with us to stay. They tell us how awesome we are, chop our bill in half and throw in three months of HBO and Showtime.

Every once in a while though, we run into a rep that is just not having it. We lob our empty threat. They thank us for being a customer and offer to deactivate our service immediately. Dejected, we tell them we need to go and will call back to disconnect later. We secretly hope we’ll talk to another agent willing to offer us deep discounts and “free” stuff because switching services is a pain.

More cities need to be the rogue rep.

When teams threaten to leave, cities should thank them for being a valued customer and offer to help them pack their bags. If all major markets just said ‘no’ to tax credits and public dollars, eventually those empty threats would disappear.

The Golden State Warriors will break ground on its new billion dollar San Francisco stadium on Jan. 17. The 18,000 seat Chase Center will be built via private financing and should open for the 2019-20 stadium. The team’s recent success and surge in popularity have helped make the move possible as the franchises valuation has jumped from $450M to $1.9B since 2010.

Stan Kroenke’s new Inglewood stadium is expected to cost nearly $2.7B. However a big reason the NFL allowed him to chuck to the deuces to the Midwest (besides the region’s 19 million people) was because of his willingness to privately finance the stadium.

Privately funded stadiums are almost a necessity in the state of California. Voters in the cash-strapped state routinely shoot down any ballot measures that seek public dollars for private sports ventures. That’s part of the reason why the Chargers and Raiders are scrambling to determine their futures. The Raiders appear to be headed to Las Vegas, where the owners will likely have to privately finance a stadium. The Chargers will be forced to join Kroenke in L.A. or bite the bullet and pull together private money to stay in San Diego.

Back in Missouri, Gov.-elect Eric Greitens stated his opposition to publicly-funded stadiums. His remarks put a wrench in SC STL’s plan to build a new downtown soccer stadium (partially funded with taxpayer dollars) with hopes of landing a MLS expansion team. After his remarks, SC STL pulled its plans for an official vote on the measure. An MLS soccer team would have a great chance for success in St. Louis. However, the city doesn’t need (and can’t afford) to foot the bill for the stadium.

If there truly is an enticing, money-making opportunity for a pro sports franchise in the region, interested investors shouldn’t be too hard to find. We seem to be in an era where the stadiums are bigger, flashier and more expensive but the return on investment is slim-to-none when cities get involved.

A precautionary tale would be the NHL’s Arizona Coyotes. Back in 2009, then-owner Jerry Moyes filed for bankruptcy and the league was forced to take over the franchise. However, the city of Glendale was left on the hook for tens of millions of dollars each year in stadium costs while the NHL shopped the team for potential owners. When the team was finally sold in 2013, how much do you think the City of Glendale profited? Exactly.

Hopefully the trend against public financing will continue to grow. Some cities will lose their teams in the short run. However, if owners want new stadiums and more revenue opportunities, they should build their own.

Power and pride to the people!

Reaching across the river

In Loving Memory of Apostle Arlene B. McClendon